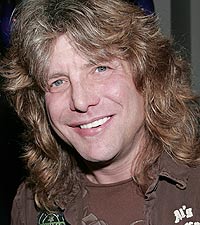 Remember when finding fellow musicians to jam with was as simple as placing an ad in a local newspaper? Well, those dinosaur days are over. Former Guns N' Roses drummer Steven Adler is embracing social media technology by using Twitter to find a new singer and guitarist for his band, Adler's Appetite.

Previous Adler's Appetite singer Rick Stitch and guitarist Alex Grossi both left the band late last week. Adler told MetalSludge.com that he found out about Stitch's decision to leave from someone else. Ouch. However, we do love that Adler doesn't give up even when life throws him a curve ball.

Adler also said he wants to try his hand at 'American Idol'-style auditions.

Follow Adler on Twitter here, or send him a message if you think you have the chops to sing or play guitar in Adler's Appetite.