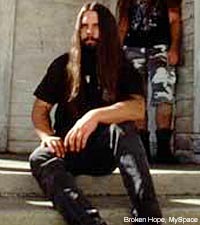 On Jan. 20, Joe Ptacek, former vocalist for 1990s death metallers Broken Hope, died from what appeared to be a self-inflicted gunshot wound to the head. He was 37, and news of his passing has shocked the Illinois metal community.

The erstwhile band's former guitarist, Jeremy Wagner, broke the news to fans online, saying in a statement that it was "with profound sadness and shock that [I report that] my friend and former bandmate -- Joe Ptacek -- has died. Joe was my high-school friend who formed a death-metal band with me called Broken Hope. We always dreamed of putting out albums and touring the world. After graduating, we achieved a lot of those dreams and released five albums, performed worldwide, appeared in countless international magazines and did a video for MTV. We were on Metal Blade Records and met all of our heroes and performed everywhere."

Wagner says he hadn't heard much from Ptacek since 2000, right around the same time the band dissolved. The band's last LP came in 1999, in the form of 'Grotesque Blessings.' In recent months, though, the two had reconnected, and "became friends again. I just chatted with him after the New Year as he and I had found a drummer and a rehearsal spot where we were to begin working to bring back a new, resurrected form of Broken Hope."

In recent weeks, Ptacek seemed "positive, healthy and had a mature and humble attitude that made me happy to see." Nothing seemed to be amiss. "I'm thankful to have known him in my lifetime and to have traveled many a mile and share many a stage with such an original character," Wagner writes. "Moreover, I'm thankful to have hugged him and to have made him smile the last time we were together. Why he chose to take his life, I'll never even begin to fathom, but I pray he's in a better place."

Broken Hope's 'Into the Necrosphere' Video