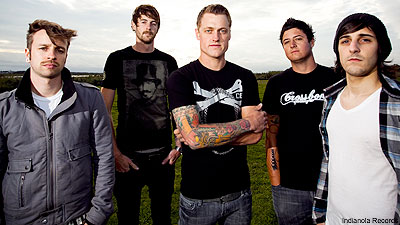 Dynamics often define the metalcore sound, with quiet parts often illustrating just how heavy a band can be, by simple juxtaposition. Forgiven Rival's 'The Grey,' from 'This Is a War,' their new album due on Indianola Records, is one such song. Noisecreep is thrilled to premiere the song, a metalcore beast comprised of equal parts moshable breakdowns and emo-tinted harmonies and melodies.

"When writing 'The Grey,' we wanted to write something we really wanted to hear," Forgiven Rival guitarist/vocalist Pete Fabrizio told Noisecreep. "Heavy verses, breakdowns, a catchy chorus and something that the crowd could sing along with us. I think we pulled it off, because to this day 'The Grey' is one of our most, if not the most popular song we have and something the fans look forward to at our shows."

Listen to 'The Grey'

Sing along now and check it out for yourself. It'll fill your brain and your ears.

Forgiven Rival, who hail from down under in Australia, have not played a date on U.S. soil yet, but hopefully, they will get their butts on our soil soon. They also have the distinction of being the first non-U.S. band signed to Indianola Records.

Filed Under: forgiven rival, ForgivenRival
Categories: Exclusive
Comments
Leave A Comment
Amon Amarth Announce ‘The Great Heathen Army’ Graphic Novel + Board Game
David Draiman Names Which Disturbed Song Is One of His Favorites He’s Ever Written
Here’s an Exclusive First Look at Funko’s New Pantera Pop! Figures Set
Tallah’s Justin Bonitz Started Screaming So He Wouldn’t Fall Asleep While Driving
Cringe or Not? – Nik Nocturnal Reacts to Metal TikToks
Artists Answer – What Song Are You the Most Proud of?
Jinjer’s Tati Shmayluk – Why We Didn’t Play ‘Pisces’ for Two Years
Baroness Plan to Release New Music in 2023
The Shocking Mistake That Inspired a Thrash Classic