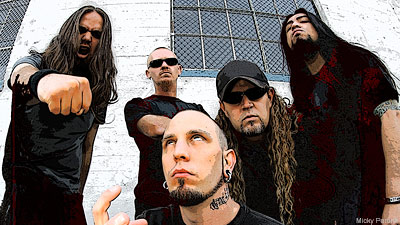 You might say the guys in Flatline are bringing back thrash. Heavily touring this summer behind 'Pave the Way,' the band is poised for the next level of rock n' roll fame. The only problem being the band members don't exactly know how to classify their sound. Flatline drummer Tim Hassemer tells Noisecreep the band is a mixed bag. "I don't know what to categorize our band as because there are so many different styles and categories and metal these days. I don't even know what the hell we are anymore. I've heard a lot of people call us good old American metal and I can go with that because that's what they call Lamb of God and I'm fine being put in the same category as them. I always thought we were just metal, but then everyone was like, 'Well, what does that mean, are you this or that?' and I always just said 'Old school thrash I guess.' I think it's up to whoever is listening."

No matter, because people are listening. Flatline is starting to take off after a more than six year climb to the top. Touring with 36 Crazyfists and Walls of Jericho doesn't hurt. The band is currently on the road with Threat Signal and The Agonist.

Constant touring comes at a price and Hassemer admits to longing for solitude. "Right now I'm reading 'Harry Potter.' I'm getting through those books now. I like fantasy stuff, 'Lord of the Rings,' 'The DaVinci Code,' 'Law of Attraction' – that's not fantasy – but I try to read as much as I can. It gets me away from the guys, puts me somewhere else. Fortunately, we all get along pretty well, that's a good thing for sure. I've been in bands where you don't and it's impossible and that's probably part of the reason why those bands don't exist anymore, but the fact that we get along, it's definitely a good thing. If we didn't, we'd probably kill each other. Sometimes, it's hard because we've been out for like two, three, four, five weeks and you're with these people 24 hours a day, it can get pretty old. We get through it."