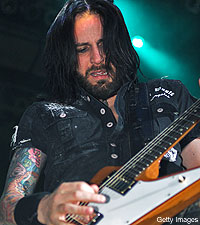 Five Finger Death Punch guitarist Jason Hook doesn't like to play it safe when it comes to recording his own music. So fans can expect an edgy instrumental album when his sophomore effort, 'American Justice,' is available later this year.

"I'm really anxious for everyone to hear it," Hook told Noisecreep. "There are some very dark and disturbing moments on there. I don't believe in playing anything safe. 'Safe' goes unnoticed, so I tend to push the envelope a little bit when it comes to political correctness. There are previews on my Web site, if anyone's curious. It's jasonhook.com. There's a player on there with the title track."

"When we did that record, we were having a lot of fun doing it," Hook said. "It's an instrumental record, so we were having a lot of fun coming up with these random silly titles for the songs. That was one of the songs we were throwing around just for fun and laughing about it. At the end of the project -- I say 'we' because I did the record with Jeremy [Spencer, drummer] from Death Punch. He's been my friend for 15 years. We did a bunch of music together, but specifically we did the 'Safety Dunce' album together.

"'American Justice,' it's a darker and more serious record than the first one. You start to see differently about things. Change your approach a little bit. The first one was a little more playful. This one's going to be a little more darker. There's some narrative instrumental stuff where we have overdubbed George Bush and some serial killer stuff."

"I was doing those things because I had no other outlet," Hook said. "Now that I'm in Death Punch, I'm fully consumed with the daily work of Death Punch. I don't know when I'll be able to make a third anything. But this one was done before Death Punch. I have to complete it and get it out there. I just have to mix it and package it."

He expects it to be released before the summer, when 5FDP joins the Rockstar Energy Drink Mayhem Festival 2010. "I work on it every nanosecond I'm at home," he said. "The last break we had, I determined it's pretty much 99 percent finished. I just have to clean up a few things and have it mixed, and then we're done."

To promote the album, Hook and Spencer have discussed holding clinics, but it's tough when 5FDP is a "24-hour-a-day job," he said.

"I like working on Death Punch," he said. "I can't imagine how I would try to fit in 'American Justice' stuff on the side. Jeremy and I have talked about trying to do some clinics or something. In our downtime, we might go do some personal appearances, the two of us. We might play some of that material in that context. It'll be fun. So that's the only thing I can think of. Other than that, Death Punch is in full swing. There isn't much time to break away to do anything else."