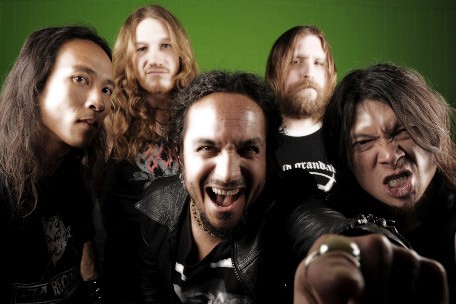 Nuclear Blast
They first exploded onto the underground thrash scene as teens in the mid-'80s and all of these years later, Death Angel are still blowing minds. The San Francisco quintet have weathered genre trends, membership changes, and even near-fatal accidents, and emerged one of the most dependable metal acts going today. Last year Death Angel released 'Relentless Retribution,' their sixth studio album, and did a worldwide tour in support of it. Since Noisecreep loves the band so much, we asked lead guitarist and songwriter Rob Cavestany to take part in our "Five Albums That Changed My Life" series.
'Goodbye Yellow Brick Road'
Elton John (1973)
"This is one of my first memories of actually listening to music and falling in love with songs. My dad had (has) the vinyl and I remember staring at the double-gatefold artwork with wonder while sitting there with his Bose headphones on and just tripping out on the entire experience. I would read the lyrics and sing along to every song. This is still one of my favorite albums to this day. The songs are incredible and I'm so glad it has influenced me in songwriting."
Buy Now

Amazon
'Love Gun'
KISS (1977)
"This was my first KISS album! It was also my first leap into hard rock. My cousin Dennis, who also was a founding member of Death Angel and our original bass player, turned me on to KISS. He had their first album and we would listen to it on his dad's stereo, spinning the vinyl on his turntable. Of course I was blown away by their look, sound and mystique. They look like Gods on the album cover! Our moms took us to see KISS on the 'Dynasty' Tour in 1979. It was our first rock concert and was the turning point in our lives as we knew we had to learn instruments and form a band for real after witnessing KISS live. We did!"
Buy Now

Amazon
'In Through the Out Door'
Led Zeppelin (1979)
"My first Led Zep tape and I remember it had just come out and I was gonna get the cassette instead of the album. I wore that tape out! I picked up 'Stairway to Heaven,' or 'IV' or whatever that album is called, shortly thereafter and it soon became my fave as I realized the difference of style between the two albums. But for a while I only knew of Zep from 'In Through the Out Door.' I fell in love with the psychedelic sound they created, and of course, the individual musicianship blending with Plant's vocals. 'All My Love' is still one of my favorite songs – as simple as it is, it's a beautifully sad expression."
Buy Now

Amazon
'Blizzard of Oz'
Ozzy Osbourne (1980)
"I can recall clear as day the moment I bought this album. I was at Tower Records at Bay and Columbus in San Francisco. Somehow I had saved up enough cash to purchase five albums at once! It was going to be my most major purchase to that date and I was excited. 'Blizzard' had just come out and there was this awesome display right in front of the store. The album cover art had me sold from the moment I laid eyes on it. In this case you can judge a book by its cover as this album was and still is one of the most influential slabs of music available. At least for a guitar player such as myself who can directly credit Randy Rhoads for inspiring me to learn and practice guitar – for real. My life is what it is to this day because of that album. By the way, that was a big day for musical influence as I also picked up 'Moving Pictures' by Rush and Tygers of Pan Tang's 'Spellbound' albums."
Buy Now

Amazon
'Ride the Lightning'
Metallica (1984)
"This album separated the boys from the men! We were already full on into the evolving sound of thrash metal by this point and then this album drops on us! Starting with the classic acoustic intro into the opening riff of 'Fight Fire With Fire,' I had never heard anything so heavy, fast and tight! Not to mention the crushing production! Those guitar tones still can't be touched. If I wasn't already a "thrasher" then this solidified it. Death Angel got to open for Metallica two nights in a row at the Kabuki Theater in San Francisco on the 'Ride the Lightning' tour, shortly after the album came out. We only had a demo tape out by then. When I got the call asking us if we wanted the gig, I almost fell out of my seat and then I ran around the house freaking out for like 10 minutes nonstop. It was a milestone in my career as a musician and for our band's history."
Buy Now