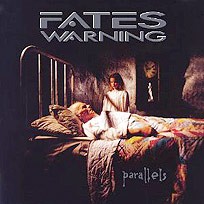 Fates Warning has been on top of the progressive metal heap for over 3 decades. Formed in Connecticut in 1983, the band has had its share of member changes, but the quality of their forward-thinking songwriting has never waned. Their early material found Fates fronted by John Arch, a singer who loved pushing the higher register of his voice. Although he has remained a legend within the prog-metal community, Arch quit the band in 1987.

The group didn't lose a step, and in 1988, they recruited Texas native Ray Alder, and Fates haven't looked back since. From 'No Exit' (1988) to 'FWX' (2004), the quintet has released one critically acclaimed album after the other.

This month, the manic minds at Metal Blade Records reissued 'Parallels,' Fates Warning's 1991 classic album that helped introduce the act to a new audience. Although the album still had many of the hallmarks of their progressive sound, the songs also had arena-sized melodic hooks that appealed to a wider fan base. Like they did with 1989's 'Perfect Symmetry' album, Metal Blade has gone the extra mile, with an additional disc of demos, and live material. The bonus DVD that features a behind-the-scenes making of 'Parallels,' plus an 80-minute concert from 1992, makes this expanded edition of the album a beast!

Noisecreep spoke with Alder, and asked him about the making of 'Parallels' and his feelings about the album almost 20 years later.

'Perfect Symmetry,' the album before 'Parallels,' marked a few changes for the band. When you were writing the material for 'Parallels,' did the band make a conscious decision to step even further from the metal side of your sound?

Jim [Matheos] and Frank [Aresti] had usually written the material separately, and then we would work on the songs as a band. But on 'Parallels' Jim wanted to take the creative reigns over, and everyone was fine with that. But it's not like we set out to become more popular or anything. Jim's style was further away from the classic metal thing, but that's just what he was feeling during that time. There was no conscious plan by the band to try and go in a mainstream direction.

Around the time of the release of 'Parallels,' Queensrÿche was having a lot of crossover success on radio and MTV. Did you find that the climate for progressive-minded bands like Fates Warning change around then?

That's always been a weird thing, because I don't think we sound like them. Around that time, they released 'Empire,' and I liked that album a lot. They tightened up the arrangements, and the songs were shorter on that record. What really kicked us in the butt was hearing the song 'Pull Me Under' from Dream Theater. Mike Portnoy came by our studio and played us a tape of that song. We knew immediately that it was going to be huge for them. We knew that we had to really step it up after hearing that [laughter].

How much input did Metal Blade Records have on 'Parallels,' in terms of the studio?

You know what -- Metal Blade has always been hands off with us. They've always been very cool with the direction the band takes. For 'Parallels,' the label gave the band our advance, and then they let us make the album we envisioned. Brian Slagel has always been great to us.

At that point Metal Blade was getting distributed through Warner Bros., right?

Yes, and having that kind of distribution was huge for the band. We sold a lot of copies of the album, and the fact that it was in most stores helped.

Vocally speaking, you sounded more in control of your instrument than you had ever in the past. How much did your producer, Terry Brown contribute to your comfort in the vocal booth?

Terry was a big help for me. He calmed me down. In the past, I just screamed a lot, and on 'Parallels' he helped me really get into a zone.

You were definitely known for your high-pitched stuff up to that point. The song 'The Arena' from 1989's 'Perfect Symmetry' had you going off like King Diamond!

Yeah, that was the era for that [laughter]. 'The Arena' was a real bitch to sing live! But by the time we went in to track 'Parallels,' I was over the screaming thing. Terry made me very comfortable, and I learned to scale back on that kind of stuff. He was great.

Speaking of Brown, did you choose to work with him because of his work with Rush, or was the collaboration suggested by the label?

It was Jim's idea. But we were all fans of Rush and the work Terry did with them. 'Moving Pictures' sounds great to this day. In the late '80s, records starting sounding really sterile. You had that massive snare drum sound, and that sort of thing. We wanted someone who could get a clean sound, but make it sound like a real band playing everything. Getting Terry to produce 'Parallels' was a dream come true for the band.

Do you remember what the fan reaction was like when 'Parallels' first hit stores?

The general reaction was great. There were some people who were offended, but our fans knew that we changed with each album. If you listen to 'Perfect Symmetry' and 'Parallels' back to back, it's not that crazy of a transition. There will always be those old-school metalheads that wanted the band to sound like we did on the first few records, but we were never interested in doing that.

Which songs from the album have resonated best in your live show throughout the years?

From that album, the songs 'The Eleventh Hour,' 'Point of View' and 'Eye to Eye,' are usually in our sets. They also do great with the crowd. I love looking out and seeing everyone singing along to those songs.

When you listen to 'Parallels,' is there anything that you're particularly proud of?

It was the first time we were all in the studio together. Since we live so spread out, writing and recording has always been an issue. But on 'Parallels' we lived in Canada together for six months. It was great to all be contributing to the process. I loved that time period, and the record sounds great because we were all on the same page.

The Fates Warning line-up that recorded the 'Parallels' album will be playing a few shows this month. Has been tough getting the band tight for these shows? Fates Warning songs aren't exactly that easy to play.

That's very true [laughter]! You know, we've played together so much throughout the years, that getting back into the groove will be easy. Joe [DiBiase] hasn't really played bass since he left the band in the '90s, so it might be a little tougher for him to get adjusted. But we're not worried.

I'm assuming you won't be playing 'The Arena' in these shows?