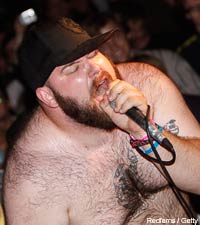 A hardcore band, whose name can not be published in most mainstream publications, won Canada's prestigious Polaris Music Prize Sept. 21 at Toronto's Concert Hall.

F---ed Up took home the Canadian album of the year for 'The Chemistry of Common Life,' hailed the past year in Spin magazine and the New York Times. The Toronto act had just entertained the invite-only industry audience with a fierce song that included 300-pound frontman Damian Abraham removing his clothes to reveal a well-distributed hairy back and tying his underwear into some sumo-style thong.

"That is insane," said Abraham when he and the rest of the band returned to the stage to accept the $20,000 (those are Canadian dollars, by the way) prize. "We got here today and we got frisked on our way in, and every time we went back, we got frisked again. So I was like, 'Oh, this is going to suck, being frisked so much and not coming away with anything.' But then I got a free iPod, and I'm like: 'Yeah' -- but this is better than an iPod. Thank you guys. And to Jon Drew who engineered the record."

Unfazed by a bucket of ice that was dumped on him, Abrahams continued: "And Jonah's parents still don't know that he plays in a band with a swear word for a name, so they just found out," he said of drummer Jonah Falco.

F---ed Up's 'The Chemistry of Common Life' was selected by an 11-member grand jury, who were sequestered during the actual event. They had about three hours to debate who should win this year's title of best Canadian album. The short-list had been determined by 182 Canadian music journalists, bloggers and broadcasters who submitted their top 5 albums released between June 1, 2008 and May 31, 2009.

The 10 albums shortlisted for the 2009 Polaris Prize were:

Hey Rosetta -- 'Into Your Lungs'