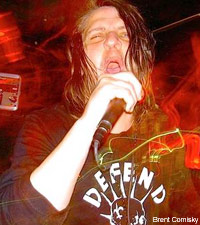 Mike IX Williams, best known as vocalist for New Orleans hardcore sludge heavyweights Eyehategod, has released a limited-edition, seven-inch record via Chrome Peeler. Side 'zero' of this odd record features 'That's What the Obituary Said,' a spoken (i.e. screamed) prose piece with ambient support courtesy of Ryan McKern (the Guilt of ...). The other side of the record -- 'the other zero' -- contains a remixed, minimalist version of 'Ten Suicides,' a track originally electronic band Bloodyminded. The track has been remixed by Bloodyminded's Mark Solotroff for this release.

Mike IX himself created the cover art for this release, which appears very textural, even as a two-dimensional digital image. There are torn paper edges and multiple layers of images including a clock, some Arabic script and a Hannibal Lecter figure in a straight jacket and muzzle with deer antlers atop its head.

Eyehategod recently completed a few dates on the East and West Coasts, including a show on a boat in New York City's harbor. The band, however, has not released a new studio album in nearly 10 years -- guitarist Jimmy Bower has been busy behind the drumset with Down (featuring members of Pantera, Corrosion of Conformity and Crowbar), while the remaining members of Eyehategod have been busy with their own side project, Outlaw Order.