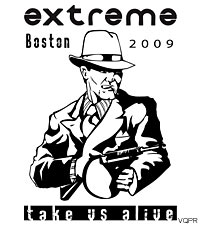 When Extreme announced their 2008 comeback tour following a 13-year hibernation, many skeptics cried, "Get the funk out!" But the 'Take Us Alive' world tour was a big success for the Boston-bred melodic metal band, prompting the decision to film and record the last date of the tour. The hometown performance at the House of Blues will be released May 4 as the CD/DVD 'Take Us Alive.'

Extreme embarked on the 'Take Us Alive' tour to support their first record since 1995, the cryptically titled 'Saudades de Rock,' which came out in 2008. And while 'Take Us Alive' features three songs from that unsung CD, the bulk of the material stems from the band's early '90s glory years and includes 'Am I Ever Gonna Change,' 'Hole Hearted,' 'Kid Ego,' 'Get the Funk Out' and, of course, the quintessential rock ballad 'More Than Words.'

"We wanted to do something really special for our hometown fans that were there for us since the beginning ... the club days," said guitarist Nuno Bettencourt. "It was the last night of the tour and we couldn't think of a better way to celebrate than by bringing it back to where it all started ... Boston."

"As much as we enjoy recording, for me, I've always loved playing live for the fans," added vocalist Gary Cherone. "We couldn't wait to get out there and play for our fans."

The 'Take Us Alive' DVD features four unreleased bonus videos from 'Saudades de Rock' -- 'King of the Ladies,' 'nterface,' 'Run' and 'Ghost.' "This DVD/CD is a culmination of all the years we played together and the chemistry the four of us put out live," Bettencourt said.

The complete concert tracklist for the 'Take Us Alive CD and DVD is as follows: 'Decadence Dance,' 'Comfortably Dumb,' 'Rest in Peace,' 'It ('s a Monster),' 'Star,' 'Tell me Something I Don't Know,' medley of 'Kid Ego,' 'Little Girls' and 'Teachers Pet,' 'Play With Me,' 'Midnight Express,' 'More Than Words,' 'Ghost,' 'Cupid's Dead,' 'Take us Alive,' 'Flight of the Wounded Bumblebee,' 'Get the Funk Out,' 'Am I Ever Gonna Change,' 'Hole Hearted.'