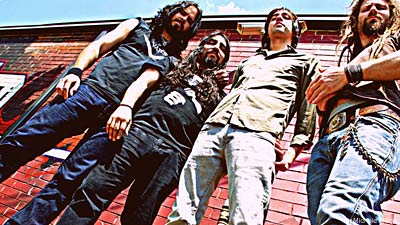 Former Bloodsimple rhythm keepers and self-professed dirty Southerners, bassist Kyle Sanders and drummer Bevan Davies, have joined forces with ex-Torche guitarist Juan Montoya and guitarist/vocalist Charlie Suarez, described by Sanders to Noisecreep as dirty South Americans, in Monstro. The band has posted the songs 'Anchors Up!' and 'April' on its MySpace. The smartly-constructed music has much more of a spacey, alt-rock bend than the members' previous associations.

First things first. Sanders explained what happened with Bloodsimple, telling Noisecreep, "There were some personal issues that came up with a part of the band that just couldn't be overcome. It actually wasn't member vs. member; it was more member vs. life. It personally hit me pretty hard, but things happen for a reason, whether it makes sense or not. It either destroys you or makes you stronger."

Davies was blindsided by the break up, telling Noisecreep, "The Bloodsimple breakup was a little unclear to me. More or less, I was just informed it was over. We came home from an Australian tour with Korn and were set to go out with Sevendust. I got a call from Kyle and was told it was due to personal reasons regarding Tim, our vocalist."

But the past is in the rear view, and Sanders and Davies have moved on. Sanders said they are doing this band "because that's what we do ... period. Either you're with me or you're not." The shared history also played a part, with Davies saying, "Kyle and I had built a little history together and had a mutual trust and mutual interests in the type of music we wanted to play. We were both bummed at the way Bloodsimple ended and decided it was time to build something that was ours."

Sanders admits that Monstro "brings in a whole new world of elements. There's plenty of heaviness, but also deep psychedelic, almost trance-like moments, with a dark, soulful side vocally," while Davies reveals the band's songs are "more musically driven than vocally, and we are not ashamed to indulge ourselves on our instruments. I feel like our songs are more like mini-journeys and less like hooks and catch phrases."

Sanders met Montoya in Athens, Ga. and subsequently found themselves backstage in Minehead, England at The Nightmare Before Christmas ATP show, which marked Montoya's final show with Torche. "We talked shop for a bit, and we were on the same page as far as the direction we each wanted to go in this God-forsaken business," Sanders revealed. "Bevan was in the same boat: looking to stay busy playing in something he believed in 100 percent, and preferably sticking together."

Fatty junk foods aside, Monstro are working hard to record "six or eight or 76 more and get the hell outta town," according to Sanders. A proper full-length is on the docket and Davies said, "We plan to immediately begin spreading this virus regionally and not just locally. By late summer, it would be nice to have Monstro on a national tour, but in the meantime, we will be writing tons of new music."