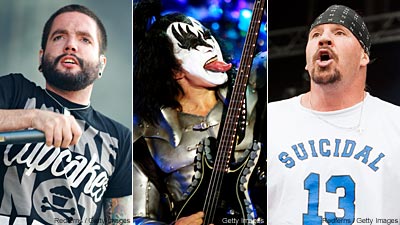 Kiss and Eminem on one bill? No, I'm not kidding. The blockbuster two-day Epicenter Twenty-Ten festival, which will be held on Sept. 25 and 26 at the Auto Club Speedway in Fontana, Calif. -- which is about a half-hour from downtown Los Angeles -- will boast performances by Eminem and Kiss, who will play their only California date of 2010 at the fest.

Other must-see performances are planned, including Blink-182 in their only North American concert this year, Bush's first show in nine years, Rise Against's only California set this year. It's a pretty exclusive two days, so if you have a free weekend and some disposable income, this is the event to attend. Other noteworthy heavy acts include Suicidal Tendencies, Thirty Seconds to Mars, Papa Roach and A Day to Remember, so metal is more than well-represented at Epicenter Twenty-Ten.

The show will also boast multiple stages and will not have any schedule overlaps, so there will be no running back and forth to see bands and risking the chance of missing them. That's always the biggest headache of a multi-stage festival, and that problem has been effectively solved with no overlap.