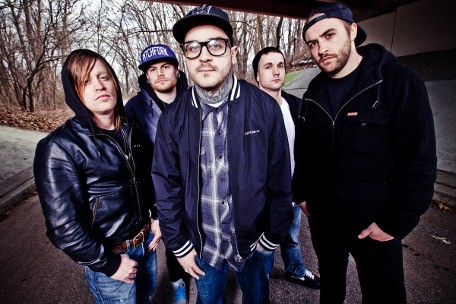 Mosh 'n' rollers Emmure launched a lyric video for "I Am Onslaught" from Slave to the Game, which drops tomorrow. Crank it up and learn the lyrics so you can sing along, stat. [Vevo]

Mastodon and indie rock goddess Feist partnered up to cover one another's songs for a split 7" for Record Store Day (April 21) called Feistodon. The album artwork has been revealed and it's a cut and paste job of their faces and covers. It's like a chimera, not to be confused with Chimaira. [SPIN]

Six Feet Under shared the black and red cover art for Undead, as well as the track listing, which includes song titles like "Frozen at the Moment of Death," "Molest Dead," "Blood on My Hands," "Missing Victims" and "Formaldehyde," the latter of which you listen to online. The album drops May 22, like a guillotine on your neck. [Metal Blade]

Female troupe Vixen have nixed ("vixed" maybe?) their Kickstarter campaign, which they employed to fund the recording of their new album. The band hoped to raise $35,000 but only managed to rake in a paltry $1370.00. However, someone else with deep pockets apparently came to the rescue. The band issued a statement, saying, "We are very happy to report that we recently received an offer that was too good to refuse, as they say, so we thought it was appropriate to cancel this project and focus on other opportunities. The good news is, as we have promised before, we will be recording a new album this year and we expect to release it in honor of the 25th anniversary of the release of the first Vixen album." [Blabbermouth]

Forbidden's Craig Locicero offered an update on the band's status, saying they are writing and what they have so far is a "smoking-shit-hot-thrash-attack!" The band will get together to record at end of year and hope for "a 2012 release...if there is a 2013!" Here's to being optimistic for metal. [Nuclear Blast Press Release]

Shai Hulud have recruited original singer Chad Gilbert of New Found Glory to produce their fourth album, which follows 2008's Misanthropy Pure. Gilbert served as the vocalist on the band's debut Hearts Once Nourished With Hope and Compassion, which put the Hulud on the map. "Matt Fox hit me up while on tour about potentially producing their new album," Gilbert said. "I immediately thought it could be an interesting and fun team up but I really wanted to hear new demos before agreeing. He sent me a few new songs and I was pleasantly surprised! The songs were awesome and felt very classic; the melodic hardcore metal they are already admired for but taken to another level. I think with us teamed up we can make the best Shai Hulud record yet!" [Metal Blade Press Release]