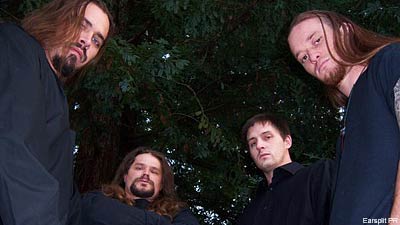 High on Fire aren't the only band writing about author David Icke's theories about an ancient reptile society that continues to rule all financial and governmental matters conducted on the earth. California tech-grind band Embryonic Devourment, it seems, are also inspired by Icke, as evidenced by their new song 'Militarized Reptoids,' which they recently posted on their MySpace along with 'Darken Thy Fluids.'

The songs come from the group's upcoming full-length 'Vivid Interpretations of the Void,' the follow-up to the band's 2007 debut album, 'Fear of Reality Exceeds Fantasy.' The new album, which is due later this year, is based entirely on Icke's "Reptilian Agenda."

"This is basically our whole theme and platform for the new release, the theory that a reptilian race controls our world," said bassist and vocalist Austin Spence. "The reptilians need the menstrual blood of a virgin in order to keep their human form. These are the same gods that the Aztecs and Egyptians weren't allowed to depict. The reptilians go by their name 'Chitauri' which means 'the talkers.' They have been in control of our world and many others for thousands of years. The Aztecs predicted the human harvest for 2012. We'll see what happens?"

As the teaser tracks suggest, 'Vivid Interpretations of the Void' will be musically complex, unreservedly vicious and heavier than a reptile palace. "Expect fast, grinding drums and enough technicality to rip your face off," Spence said. "Fans of early Cryptopsy, Cephalic Carnage and Spawn of Possession [will lose their minds.]"