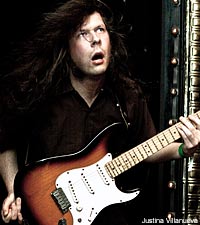 Over three years ago, I was introduced to Dysrhythmia's 'Barriers and Passages' through a couple friends who saw them open for Dillinger Escape Plan. After watching them countless times since my discovery, the band's MySpace motto, "No vocals, no breakdowns, no dancing, no fun!!!" became my mission for new music.

And watching Dysrhythmia at Union Pool only two and a half months after their record release show at the same venue reminded me just how bad-ass three regular dudes could be with instruments. Show openers Stats (formerly Stay F---ed) and the Smother Party prepared the night with more no vocal trio spirit.

Dysrhythmia was on full display with the meanest Colin Marston has ever been, the angriest Kevin Hufnagel has ever played -- that I've seen at least. With 33 days of tour behind them, Dysrhythmia gave Union Pool a tight and energetic performance. Pauses were stretched as far as they could be and discordant breakdowns were more damaging than they were ever meant to be -- and I was extremely happy I left my house on a chilly Sunday night.