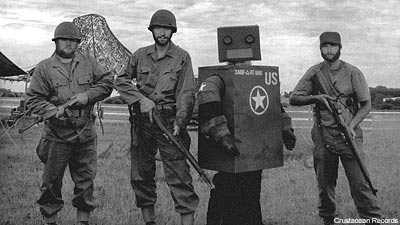 Perhaps it's because they base themselves out of the relatively low-key music scene of Madison, Wisc., but Droids Attack don't seem too concerned with adhering to any sort of standard that their more famous peers may have established. While their music is seriously crushing, as demonstrated on their new album 'Must Destroy,' they don't take themselves all too seriously -- evidenced be their droid mascot (aka Robo) or song titles such as 'Great Wall of Gina.'

"I think what it boils down to is that some people expect a band that sounds like us to portray ourselves a certain way, and that's fine, but we get compared to bands like High on Fire and Kyuss a lot. And it's weird, because I don't listen to those guys," guitarist/vocalist Brad Van told Noisecreep.

"I suspect we draw a lot of our inspiration from the same bands they listened to, like Black Sabbath, King Crimson and Captain Beyond," Van continued. "But anyway, no, I'm not particularly interested in participating in any kind of rant about what really makes a band more 'metal' or 'punk' or whatever. But whatever logic goes into that -- I would wager it doesn't include adopting an image that's more in sync with what people are used to in order to become more successful. We're not pretending to be anything we aren't. We're just jamming as hard as some of the hardest bands out there minus the 'tude."

On top of being a metal band with a sense of humor, Droids Attack took things one step further by opening a show for comedian Doug Stanhope. Van explained, "I was tooling around online and saw that Doug was heading to Madison. I contacted him through his Web site to see if he needed any opening acts to support the show. At the time, I was still pretty naive to his career, thinking this underground comedian could really use our hometown support. He responded and said 'Sure, why not?' which went further in supporting my inaccurate position.

"Fast forward to the night of the show. The place is packed, everybody is excited to see Doug, and I'm beginning to think perhaps there is more to this underground comedian than I first thought. So we're backstage with Doug, and he proceeds to tell me that all bands who open for him are consistently met with jeers. He goes on to tell me some decent comebacks to use on the crowd when they heckle us, and I'm thinking, 'Man, we've never opened for a comedian before. This is going to be a disaster.' I got kind of nervous, but we went out there, did our thing, and people really responded to it. We sold a bunch of merch and won over some new friends. Doug slayed, of course. It was a great time."

After the show, however, the band went to celebrate at a local restaurant when things took a turn for the worse. Van recounted, "Bassist Nate left the table to have a cigarette and did not return, so after about 10 minutes we went outside and found him stumbling around the parking lot bleeding from his head. My first thought was that he had been jumped by someone he inadvertently gave the stink eye to. He leers when he's lit."

Turns out there was no stink eye involved, at all. "Just as we discover him, I get a phone call. It's Doug. I am horrified by the sight of my good friend all disoriented and covered in blood, but I am equally concerned that our new friend Doug needs something important, so I take the call while our drummer Tony and a parking lot security guard tend to Nate. Doug tells me he just wants to say thanks for performing with him, he had a great time, and he enjoyed meeting us. I am completely surprised and moved by his thoughtfulness. 'Hey, thanks! We had a great time, man! You are too kind!'

"All the while I watch as the security guard flashes a light in Nate's eyes making sure that his pupils are still dilating properly while Tony dutifully props him upright. Turns out, Nate just stumbled over a concrete block while lighting the smoke, which is a relief, and also kind of funny once we know he is alright but will suffer one hell of a hangover. That was a crazy night for sure! Hopefully it won't be the last time we hook up with Doug. He's a really nice guy."