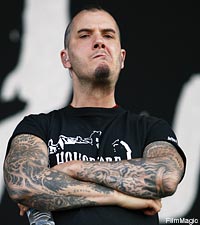 Anaheim, Calif. is essentially Disneyville! The charming city, home to the Angels baseball team as well as the Magic Kingdom that is Disneyland, is a tourist haven. Right in the center of the family-friendly, Downtown Disney shopping area, which is essentially an outdoor mall, is the Anaheim House of Blues, which hosts many a metal show.

I took in an evening of metal featuring Down and the Melvins at this very venue and it was almost more fun to people watch. Seeing families of four and five browse and do some window shopping at the stores amidst longhaired, black-clad metalheads was as much of a treat as the actual show itself.

I am proud to report that King Buzzo of The Melvins is still boasting his trademark, Sideshow Bob-like Afro. From the stage, he asked a poignant question, which was, "Has anyone seen the big guy with the long hair?," which pretty much referred to everyone in the room! Down bassist Rex Brown is sitting out the first half of the tour and has been replaced by a fill-in for an undisclosed period and it turns out Brown may miss the entire tour. Anselmo jokingly told Mike Z. of local metal show "The Moshpit" on KCAL FM the week prior that Brown was sitting out due to the "economy," but that he would indeed return.

I escaped the show with ringing ears, thanks to the deafening set, and a brand new Down tote bag that I am proudly sporting!

Download Down Songs
Filed Under: down, the melvins, TheMelvins
Categories: News
Comments
Leave A Comment
Back To Top