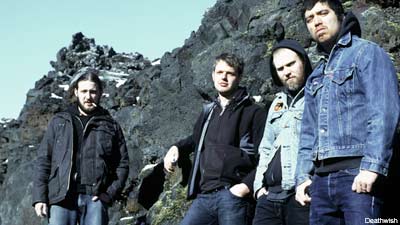 "We almost didn't make our flight. I'm sick. You're sick. Now we're caught up," Doomriders frontman and guitarist Nate Newton said, getting the band reacquainted with Atlanta, a place the band hadn't played in almost four years. The Feb. 10 show at The Masquerade marked only a handful of shows the Boston band has been able to play since the release of their sophomore long player, 'Darkness Come Alive,' back in September. Of course the reason the band has been absent from the road is due to Newton's main job as bassist of Converge.

"Since this latest Converge record is probably our most successful to date, the momentum of Converge, which blows my mind, keeps building. As that builds, it becomes harder for me to do stuff with Doomriders," Newton told Noisecreep while sitting backstage before their set, trying to mute a cold with vitamin-infused water.

Newton revealed getting tours finalized for Doomriders has been a "logistical nightmare but every now and then the planets align." The controlling force that got the band to open two free shows for Skeletonwitch was the car company Scion.

Playing for a corporation was a black-and-white, sell-out issue back in the '90s hardcore scene Newton began in, so it's expected that he's wrestling with his DIY ethics playing these shows. "I still have mixed feelings about it. They've been really cool to us, so I can't complain about it. I just always feel strange taking money from anybody."

But things may be gray now. "This is gonna sound like the biggest cop-out answer ever, but the music industry is changing," he explained. "Everything is changing. You can't really operate on the same sort of paradigms that you did 10 or 15 years ago. You can't depend on selling records to make enough money."

Converge had the same issue last year when they played the Scion Rock Fest. They decided to juggle their misgivings and personal conflict by joking on stage about it.

As the conversation went on, Newton felt more at ease with the band's decision to play. "It really seems like Scion -- or somebody who works there -- is really interested in music. They really have no problem overpaying bands," he grinned and tried to laugh without coughing. "I'll take your money. I'm just not gonna buy your car, but whatever.

"They guarantee us money, which is nice -- especially coming from the scene we came up in. What's there to complain about really?"

But standards have to be set. "It's not like we're on one of those Monster Energy Drink tours," Newton declared. "I feel that the way that Scion operates is much different. It's about the bands and about the music and the fans."

At the end of March, Doomriders will head out with the instrumentally epic Red Sparowes -- a band that goes quiet, loud, then quiet again. When asked if the 'Riders will tone down at all for the shows, Newton laughed. "We got two settings," he joked. "On and off. We're just going to turn it on, and if people like it, cool. If not, whatever."