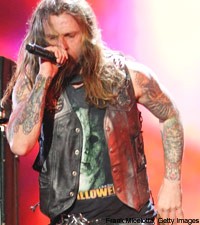 Rob Zombie put out two albums after his 1998 solo debut, 'Hellbilly Deluxe: 13 Tales of Cadaverous Cavorting Inside the Spookshow International.' So why is his new album, 'Hellbilly Deluxe 2: Noble Jackals, Penny Dreadfuls And The Systematic Dehumanization of Cool' considered the follow-up, even though his last album was 2006's 'Educated Horses'?

"I had the idea for making 'Hellbilly Deluxe 2' long before we ever did the album, but I didn't want to just call any record that," Zombie explained to Noisecreep. "I like the idea that it's a good bookend, because at the time when we were recording was exactly 10 years later, and I thought, 'That's kind of neat to make a sequel.' We do it enough with movies so why not with records?"

The title wasn't a done deal at this point, though. "But it wasn't until we were completely done. We had mixed it and we had been listening to it forever, and I still hadn't decided if I was going to call it that. I realized it kind of had the spirit and the vibe of the first record. While musically, it's different, I just thought it made sense."

Of course, there had to be a crazy subtitle just like the first, a spotty tradition he started with his former band White Zombie and the 1995 album, 'Astro Creep: 2000 -- Songs of Love, Destruction and Other Synthetic Delusions of the Electric Head.' Like the other two lengthy titles, this was will also be truncated, to 'Hellbilly Deluxe 2.' "The subtitle makes no sense for everybody. Well, it makes sense to me," Zombie said.

So what is contributing to 'the systematic dehumanization of cool'? "Oh, I don't want to explain it. Everything is. Nothing's cool anymore," Zombie said. "That's all we do. We sit around and talk about why nothing's cool anymore. I did an interview and that's all I talked about for the last 20 minutes."

People nowadays also talk a lot about 'branding,' something Zombie has naturally achieved by virtue of the fact of who he is and his artistic output. With his aggressive music and campy and ghoulish lyrics, and a horror film career as a screenwriter and director of 2003's 'House of 1000 Corpses'; its 2005 sequel, 'The Devil's Rejects'; 2007's 'Halloween' and 2009's 'Halloween II,' Rob Zombie has become a recognizable brand. People who like his music will likely like his films, and vice-versa.

"That sort of just happened naturally," said Zombie. "That wasn't a conscious effort. I'm pretty in touch with my audience from my music and I knew that the films I was making would probably appeal to that audience, but I didn't make those films for that reason. Those are just the films I wanted to make at that time. Everything I do, I mean, if it comes from you, it should have your brand on it, I guess, or your stamp is a less corporate way of putting it."