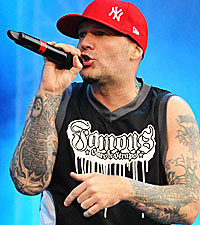 Since Limp Bizkit signed with Cash Money Records, frontman Fred Durst has been talking enthusiastically about delving further into hip-hop and moving his band in bold new directions. As he embarks on this sonic journey, TMZ reports, he may do so without DJ Lethal and drummer John Otto, both of whom he's considering firing.

According to the gossip site, Durst has a "new vision" for the enduring nu-metal outfit, and it doesn't include his longtime sidemen. While the red-hatted rap-rocker hasn't yet handed them pink slips, he's apparently unhappy with their hard-partying ways.

In a statement to TMZ, DJ Lethal confirmed the tension within the group.

"We've worked together the last 4 years to bring Limp Bizkit back to where it is today ... and to just be thrown out on the street after the band gets a new deal and a new chance at life isn't cool," he said.

He added that shows featuring only three-fifths of the original lineup wouldn't be "truthful" to the fans.