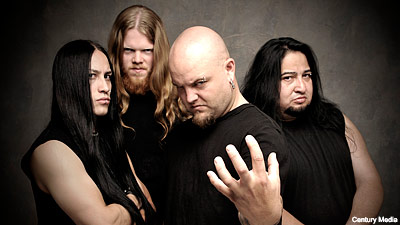 When Divine Heresy songwriter Dino Cazares decided to get a bulldog eight months ago, he was looking for a companion -- not a breadwinner. So, he went to a breeder, picked up a cute, frisky puppy and named him Diablo. "As he got bigger, I noticed he was a really good-looking bulldog," Cazares tells Noisecreep. "We decided to enter him in a contest to see how he would do."

Cazares was hoping just to get good scores from the judges when he signed Diablo up for the Long Beach California Bulldog Beauty Contest. He certainly wasn't expecting to win. Many of the other dogs and their owners had experience from previous competitions, and they'd also undergone dog training school. But when the head judge announced the winner at the end of the day, it was contestant 222, Diablo, whose name echoed over the loudspeaker.

"He won 'Best Looking English Bulldog,' which was the top prize," Cazares beams. "He won a year's worth of dog food from Purina and lots of other free stuff. And he was interviewed by Animal Planet."

The Bulldog Beauty Contest featured "tons of entries," including a dog owned by Ill Nino vocalist Christian Machado. And for Diablo, there was plenty of drama. After the first round, in which judges ranked the dogs' looks and personalities, then pared down the playing field to the final 10 canines, Cazares and Diablo were invited back for round two. During their second stroll around the red carpet, Diablo was attacked by another dog.

"This dog ran out of nowhere and grabbed him by the neck and started shaking him," Cazares recalls. "We separated the dogs and the whole crowd was like, 'Oh my god!' And once I saw he was fine, I put him back on the floor and everyone cheered."

While Diablo didn't look hurt, he had a couple of bite marks, so Cazares decided to bring him to the on-site veterinarian to have him checked out. But as the two headed to find the doggie doc, Diablo was announced as the winner.

"We had to run back, and they have him the crown and he got to pose with these hot model chicks," Cazares says. "After that, we started taking him to doggie acting classes so maybe we can put him in commercials. I'm like, 'Look dude, you're a winner. Now you've gotta start earning your keep.'"