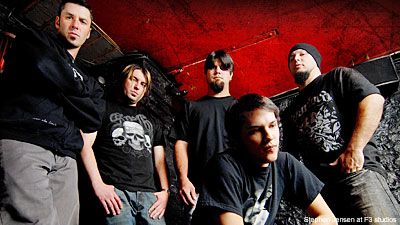 Dirge Within guitarist Shaun Glass has an extensive hard rock history. Having cut his teeth in the death metal band Broken Hope before moving on to the much more commercially accessible rock band Soil, from which he parted several years ago, Glass is doing his thing with his new band Dirge Within, who recently inked a deal with E1 Entertainment.

"Growing up as a diehard metal fan and playing in various bands, I can honestly say this is where I belong," Glass told Noisecreep. "Dirge Within has it all for me. Even though my former bands were so vastly different from each other, one thing did remain the same and that's that I have always strived for the perfect balance of hooky songs and solid musicianship."

Glass deems Dirge Within "the next level in modern metal" and he and his cohorts are "beyond happy with how our debut album is shaping up." The band's debut, 'Force Fed Lies,' is due out on September 1 of this year and Glass offered a little idea of what to expect, saying, " The songs have many soaring solos courtesy of Jerm's strong, deep, brutal vocals and Matt Szchlachta, who in my opinion, is one the best lead players ever. The metal world will be embracing his style soon."