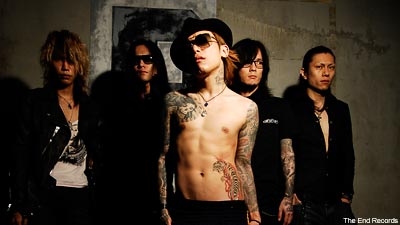 "I think this DVD captures human emotions, what we're made of, and it channels it through our videos," Dir En Grey guitarist Kaoru told Noisecreep about his band's latest DVD, 'Average Blasphemy,' which will be released via The End Records on Oct. 27.

The comprehensive DVD collects all the videos the Japanese band released in America, including the 10-minute epic 'Vinuska' and 'Dozing Green,' which was honored with the MTV Headbanger's Ball Award! Dir En Grey were pleased to pick up the award, but were humble about it, too, with Kaoru saying, "This is not something we ourselves have the answer to. It's all thanks to our supportive fans that we love."

The DVD will also feature 'making of' footage, director's cuts and alternate edits of their videos. So it has attained must-own status for Dir En Grey diehards who are itching to gobble up every scrap of audio/visual material from the band, who've earned a bit of a cult status in the States.

Kaoru also said that 2010 "will be focused on us working on new songs, but if there are offers waiting for us, we'll be out on the road again touring for sure."