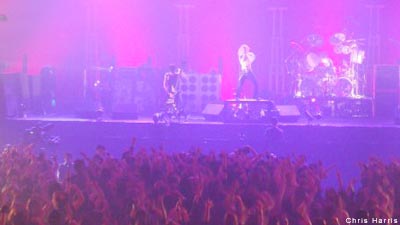 The list of metal bands who'll tell you they're big in Japan is extensive, but no band could ever claim to be bigger in Japan than Dir En Grey. Just walking through the city's frenzied Shibuya business district, among the meticulously-manicured and flamboyantly-dressed Harajuku girls, it seems as though every other person is wearing one of the band's shirts. Teenage girls tote handbags emblazoned with the band's logo, and Dir En Grey patches adorn backpacks and jackets as far as the eye can see. In short, Dir En Grey are much more than a band here: they're a phenomenon.

Over the weekend, Dir En Grey capped what has been a solid two-year promotional run for their seventh LP, 2008's 'Uroboros,' with two sold-out shows at Japan's iconic Nippon Budokan, an arena made famous by the likes of Cheap Trick, Bob Dylan, Ozzy Osbourne and Dream Theater, who've all recorded live albums here. Tickets for both of these career-defining shows were gone less than 15 minutes after they first went on sale. Fans from Sweden, France and even New York hopped on jetliners to be in Tokyo for what will likely be the band's last spate of live gigs for some time.

Unbelievably, 10 hours before the Budokan's doors would open on Jan. 9 for the weekend's first show, thousands of fans started gathering outside the arena, forming well-organized and well-orchestrated lines across the venue's grounds, despite having already secured tickets. Their purpose? To not only socialize with other Dir En Grey fans, but more importantly, to ensure they'd be in prime position for the merch tables. The huddled gaggle, mostly females with ripped thigh-high tights, school girl skirts, piercings and bleach-blonde hair, would eventually pack out this storied arena -- originally erected to host judo competitions during the 1964 Summer Olympics -- about an hour before show time.

Inside the Budokan, dozens of flower arrangements lined the corridor leading up to the band's dressing room. Some of them, Dir En Grey's camp informed Noisecreep, came from other Japanese bands wishing the guys a hitch-free gig. Others were from some of the companies that endorse the band. The arena hummed with idle chatter as fans awaited the start of the show, which came without warning. Suddenly, the entire venue went black, setting off a deafening chorus of unhinged screaming. Projected on a huge silkscreen shielding the stage from the audience were images of rotting meat slabs. The Budokan began to rattle from the boom of bassist Toshiya's imposing slapping. The screen dropped, revealing Dir En Grey, who launched into a set that boasted tracks like 'Red Soil,' 'Stuck Man,' 'Merciless Cult' and 'Dozing.'

While Dir En Grey destroyed on stage, the real action was in the stands where all of the band's fans were headbanging with a synchronized intensity rarely seen in the States. It was almost as if they literally wanted to detach their heads from their own bodies. And when they weren't banging their heads, they were pumping their fists. This, too, was synchronized, as if it'd been rehearsed, and would've reminded you of the infamous tomahawk chop at sporting events. At other times, they made a different kind of gesture with their hands, one that was frantic and something this journalist has never seen during a live show. Now, this may sound crude but, really, it looked as though the fans were giving the air ... there's just no other way to say it ... hand release.

Unlike American crowds, this one didn't stage dive, didn't mosh. No one tried to crowd surf, and no one disobeyed the arena security, who kept the crowd partitioned off into various sections across the venue's floor with nothing more than rope.

Meanwhile, projected on screens behind the band were images of World War II: warheads falling from the sky, atomic bombs detonating into mushroom clouds, the mangled bodies of Japanese children caught within the blast zone, the aftermath of the bomb and American soldiers celebrating the eventual surrender of the Japanese. Dir En Grey sounded tight, and frontman Kyo, with an almost 'Appetite for Destruction'-era Axl Rose stage swagger, growled his way through cuts like 'Glass Skin' and 'Dead Tree.'

Like the first night, the second night at Budokan was filled with sporadic pyro, spastic yet eye-catching lights, two encores preceded by five minutes of straight chanting -- and stock footage of death, pollutions, pestilence, microscopic insects and body parts. The mood and music was much heavier. Perhaps it's because the band switched up its set, adding songs like 'Deity,' 'Agitated Screams of Maggots' and 'Inconvenient Ideal' into the mix. Perhaps it was because it was the last stop on what's been a very crazy ride; the end of an era for Dir En Grey, who'll now begin focusing full-time on their next LP.

You could tell Dir En Grey were having fun up there, doing what they do. That was especially true for guitarist Die, who seemed to revel in the entire experience and appreciated the magnitude of the situation. Luckily for American fans who couldn't make the 14-hour direct flight, there were 10 cameras on hand to capture all of the madness for a forthcoming DVD release.