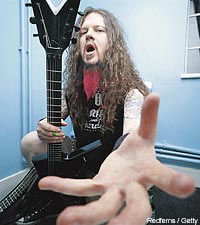 You'd have to be living under a rock to not know that yesterday, Dec. 8, 2009 marked the fifth anniversary of the death of guitar hero Dimebag Darrell. One of the greatest tragedies in metal history, the late Pantera guitarist was shot and killed on stage while his band Damageplan was performing in Columbus, Ohio. He was just 38.

But in the brief time that he was here, Darrell lived a lifetime. He made the most of every moment and left behind a catalog of amazing music, piles of outrageous videotapes and an endless supply of stories both for the people who knew him and those who were inspired by his music. In commemoration of a legend, Dime's longtime friend and guitar tech, Grady Champion, posted the following message on his Facebook page: "Everyone have a moment today to think of Darrell and how he made your life a little better by knowing him."

The responses that came in were touching, funny and sometimes surprising, revealing the kind-hearted, larger-than-life rocker who lived his own way and loved the life he lived.

Former Pantera bassist Rex Brown (Down) wrote: "Not one day goes by without a glimpse, or memory of all the crazy s--- we used to do. I'll always remember Dime as the woolied haired 14 year old, entranced of Randy Rhodes, learning every nuance

of 'Blizzard of Ozz.' That's when it all started with me. There's only a few of us, that really had the blessing of watching that blossom into the sincerity, conviction and passion that rubbed off on every one of us. I think everybody knows the story from there. Today, is a not a day to be sad, It is a day to remember all the good and crazy times we had with this man!! Celebrate life, celebrate Dime!!! My brother, rest in Peace!!!!!"

Childhood friend Kelly Whaley echoes Brown's sentiment and recalls Dime's mischievous streak: "Rex you hit it right on the head," She wrote. "I remember driving my grandmas Cougar over to Carolynn's one night. The next morning the hood ornament was missing. Being 17, I heard some s--- about it. Two weeks later [it] seems Darrell had been wearing it on his homemade 'rapper chain!' You had to always watch your back! Love Ya ... Peace Darrell. You were always about that!"

Childhood friend Robert Clendening posted: "I remember being at his birthday party where he got the bicycle that he wanted to trade in for a guitar. Can you imagine if he had kept the bike? Lance Armstrong wouldn't have had s--- on Dime the cyclist."

A former associate who goes by Si Moon said: "I'll never forget sitting with Dime cross-legged on the stage at Milton Keynes in1998, and every time [Black Sabbath] hit a groove he'd nudge my arm and nod his head. A true legend and massive loss to so many lives around the world. Fly on ..."

Rick Kazyaka remembers Dimebag as someone who gave everything to his fans and friends. "I met Darrell in 1981 in 10th grade at Bowie High School. My band Icky Rock opened for Pantera on senior skip day in 1982 at Eagle Mt. Lake. He showed everyone in my band how to play 'Let It Go' by Def Leppard. I also have fond memories of the parties on Monterey and guitar lessons. He was a great friend and didn't let his stardom go to his head. He gave me $100 cash [at] the Damageplan CD release [party] at the Clubhouse in February '04."

Another friend, Clint Barker, recalls great days with Pantera from the start of their major label career: "One of my faves, Grady, was me and you with Darrell at DCL doin' shots of Jaeger, then goin' out to your Volkswagen Rabbit, I think it was, and listening to the Cowboys From Hell demo with no vocals and just plain rockin' out!! Not to mention Darrell's nasty-ass video 'Too Fat to F---!' Good Times! Black Tooth Grin!"

Music promoter Art Garceau wasn't close to Dime, but remembers the musician's endless generosity: "Pantera is who got me playing guitar, and now working in the music business," he wrote. "I met Dimebag when I was 13 years old while he was promoting the Washburn line of his guitars. Quite possibly the nicest dude I've ever met. He ran out of Washburn flyers so he started emptying his pockets and signing his own stuff for people. It was always a dream of mine to one day record the Abbott brothers or work on one of their albums."

Argentinean fan Marioano SouthofHeaven wrote about the substantial impact a couple encounters with Darrell had on his life: "Pantera hit Argentina, in December '93, I was in heaven. I sneaked to the press conference room and all my stuff felt to the floor -- my camera and the cheap whisky I bought for Dime as a present. After the press left, I gave the bottle to Dime and my band's T-shirt (Vampira). That night Dime played the whole show wearing the shirt I was in the middle of the pit screaming like an idiot, 'That's my band!' That night I went to a local club (La Cruz) and there were all of them, and I hugged Dime and told him I loved him and thanked him for all the music and for being my guide as a guitar player.

"Then I asked him if he wanted to jam some Kiss songs with my band, and he said yes. Wow! I brought my Randalls and all the gear to the club the next day, but the club owner made a radio commercial saying Pantera is playin' tonight at my club and nobody could enter 'cause the streets were flooded with fans. There went my 'I almost played with Dime chance.' Then in '95 Pantera came back and with a lot of luck, we caught them at the exit of a local meat restaurant. We were with our minivan and Dimebag remembered us. That was a total surprise for us. We went to the local bar and partied with them."