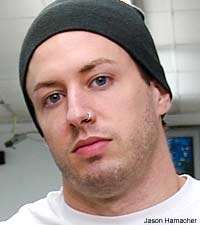 Dillinger Escape Plan vocalist Greg Puciato has responded exclusively to Noisecreep about an unfounded steroid accusation levied at his doorstep by MTV.com. A post claimed "the diminutive wailer for New Jersey spazzers Dillinger Escape Plan is ripped enough for a man five-times his size, and though he's denied using steroids (he chalks his physique up to "eat[ing] a lot of protein and work[ing] out a lot"), we're still not entirely convinced. Then again, positively destroying the stage on a nightly basis has to have some benefits, right?" To say "not entirely convinced" indicates that the writer still questions whether or not Puciato is juiced up. In the wake of Mark McGwire admitting his steroid usage -- as if the whole world wasn't already aware of that -- MTV.com's statement has certainly sparked Puciato's ire. And no, we don't think his response is a symptom of 'roid rage. We believe that he's just physically fit and well within his rights to be totally pissed off.

"In a bizarre MTV news story today about Mark McGwire and steroids, some writer guy who writes 'news' that nobody probably reads anyway decided to basically accuse me and some other musicians of steroid use," Puciato said. "Irresponsible? Yes. Understandable? Of course, because he obviously doesn't know what it feels like to have actual willpower and drive. I don't know what it feels like to be a total p---- who manifests his own inadequacies by accusing other people of cheating in order to achieve something of notice."

Puciato continued, "Unfortunately for him, they don't have 'writer potions' that he can take to better himself at his chosen hobby. While this isn't the first time that someone has presumed that I take steroids, it is the first time that I can think of that it's been publicly presumed. Although I usually take it as a compliment, it borders on slander when done in this way, and in actuality, it's more of a shame that we live in a time in which people assume that you need to cheat somehow in order to actually achieve anything worthwhile.

"Your article says more about you, James, than it says about me. Regardless, thanks for the publicity softball pitch, and you can thank me in return. Keep practicing the whole 'writing' thing, cause it apparently doesn't come that naturally to you. And meanwhile I'll go pop all the huge zits that I have on my back, beat the s--- out of my girlfriend for having a guy friend, start a fight at a sports bar, drunk-bang a bunch of 19-year-old sorority chicks and crush 20 Wendy's double stacks."

Greg, we salute your honestly-earned yard hard body and everything you said! Dillinger Escape Plan's new album 'Option Paralysis' is due out in March.