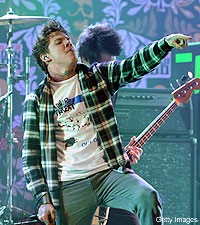 "It's an honor to be nominated" is usually just a cliché people spout when they've lost an award. But in the case of the Devil Wears Prada at the recent Revolver Golden Gods Awards in Los Angeles (which airs on VH1 Classics May 22) that tried and true adage is sincere. Losing to Metallica in the Best Live Band category is nothing to be ashamed of, and the Dayton, Ohio sextet told Noisecreep beforehand that just being included in the discussion is a great honor.

"We've always focused ourselves on more of a live band than a studio band, so it's a privilege to be recognized for that," frontman Mike Hranica says. "Personally I've always said if you want to go see a band, you go see the band -- if you wanna hear a band, you listen to it on CD."

The band got a chance to show off why they got the nod performing on a bill that also included Slash, Rob Zombie, Lemmy Kilmister, As I Lay Dying and more. For a young band being on the same lineup as all of those titans, and with the likes of Ozzy Osbourne, Alice Cooper and Rob Halford in the house, it meant some serious nerves. "[I've got] spiders in my stomach," keyboardist James Baney admitted, while guitarist Chris Rubey added, "[It's] probably the most nervous I've been before a performance."

They'll be back in a more comfortable environment this summer when they hit the road, though. "We're doing this small club tour, it's called the Back to the Roots Tour," Hranica said. "We're doing a bunch of nights at a bunch of small clubs all across the country, trying to bring back and intensify the show."