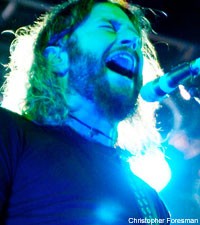 The Windy City rumbled Oct. 17, as one of the biggest metal shows currently crisscrossing the States hit Chicago's Aragon Ballroom. And the city's illustrious blog, Chicagoist, was there to cover the debauchery. Imagine this: The gig started promptly at 6:30 PM, with High on Fire tearing "through a short, tight set of British-style garage metal" that ran 30 minutes ... a perfect start to an evening that would be capped by Converge, Mastodon and Brendon Small's Dethklok.

With the club's doors closing at 11 PM, the stage changes had to be quick. The site was also cluttered with cameramen, who were on hand to film the concert for a forthcoming live Mastodon DVD.

The blog says Converge wowed "the predominately teenaged crowed, most wearing Dethklok T-shirts." The band delivered its "signature blend of complex metal played with a hardcore sensibility. Admittedly, it was rather strange seeing the band up on such a huge stage, but frontman Jacob Bannon made it his personal jungle gym, jumping and screaming throughout the band's entire set."

Mastodon was up next, flanked by a large LED "array ... [that] played ... unearthly movie clips interspersed with motion graphics based on the album art for the band's latest" LP. The majority of the set featured songs from 'Crack the Skye,' and according to the blog, "it was the metal equivalent of staying up late and watching Pink Floyd's 'Pulse' with the volume cranked up (and perhaps ingesting your preferred mind-altering substance)." Thankfully, Mastodon dipped into its back catalogue, ending the set with selections from 'Blood Mountain,' 'Leviathan,' and even a couple from 'Remission.'

It seems most of those in attendance were there for Dethklok. "The aforementioned LED array played introductory 'Metalocalypse' 'toons, and every time a new bit came on the screen, the audience went into a frenzy. By the time Dethklok took the stage, the capacity crowd was nearly loosing its collective mind."

Small whaled on his guitar, with former Strapping Young Lad kitman Gene Hoglan, guitarist Mike Keneally and bassist Bryan Beller delivering from the stage, "while the cartoon band's videos played in perfect sync with the band live on stage. The effect was impressive, with every solo and every vocal matching up with the on-screen performances perfectly."

The blog noted some irony in the evening's festivities, which was "just how great a metal band Dethklok truly is. While the animated band is a pastiche of metal bands and musicians in general, and the lyrics of most Dethklok songs border on the absurd, the music and performance are impeccable, amazing death metal. It may be somewhat embarrassing for 'real' metal bands, but Dethklok is one of the best metal bands performing today."