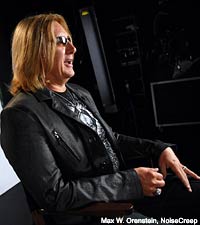 Def Leppard's Joe Elliott stopped by the Noisecreep offices recently to chat with us about the band's summer tour with Poison and Cheap Trick, their appearance at the CMT Awards with Taylor Swift and the band's recent appearance at the Donington's Download Festival. As always, Elliott was candid, hilarious and honest. And we even managed to sneak in some fan-submitted questions to this gentle, blond giant.

One such question focused on whether Def Leppard would ever consider going country, because of their recent work with Swift and Tim McGraw. "We're a rock band," he said. "If it felt right, we'd give it a go ... As for us augmenting with fiddles and banjos, highly unlikely."

Elliott also revealed the secrets to the band's longevity, dates the dudes in Cheap Trick, and defends remarks he made last year about Poison. He also told us when we can expect new Def Lep music.

"It's a case of like, if anybody's got any ideas, and I know they do because [bassist Rick Savage] already played me a couple of things," Elliott says. "I've played him a couple of things, so right there, there's four. As for when we're going to start thinking about recording a new album, I don't know when that will be. I'd imagine we'll start doing something next year."