British arena rock titans Def Leppard will be releasing a special medley of acoustic rock songs that were featured during their 2012 live shows, exclusively on iTunes today. The 7 &frac12; minute medley includes snippets of: "Where Does Love Go When It Dies," "Now," "When Love and Hate Collide," "Have You Ever Needed Someone So Bad" and "Two Steps Behind."

"We decided to change the acoustic section of the set for the Rock of Ages tour, and what we ended up with just grew into a really magical experience every night," says singer Joe Elliott. "We all enjoyed doing it so much and it was so well received by our audience, we decided to do a studio recording of it. I think it complements our main body of work very well."

Noisecreep is proud to bring you the premiere of the Def Leppard medley below!

Noisecreep (and so should you) will be at one of the dates of Def Leppard's upcoming nine-show residency in Las Vegas. Titled VIVA Hysteria!, Def Leppard will take over The Joint inside the Hard Rock Hotel & Casino to play their 1987 seminal album, Hysteria. Check out the dates below. 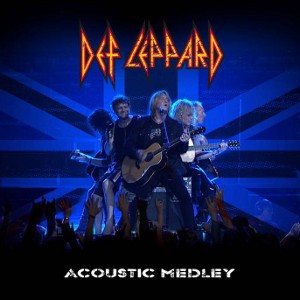 Pick up the Def Leppard acoustic medley at this link! For more information please visit www.defleppard.com.