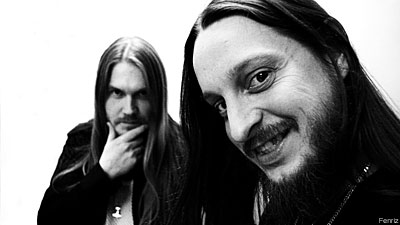 If 'Circle the Wagons' sounds like an unlikely title from black metal veterans Darkthrone, that's perfectly fine with them. The less they're associated with contemporary or conventional black metal, the better.

"The typical sound of the 90s black metal -- bands that started in the '90s copying bands an early '90s style -- is and has always been dead to me," multi-instrumentalist Fenriz told Noisecreep. "I don't feel it. I like the bands that sounds like they could've been from '81 to '91 -- bands like Faustcoven, Old, Hellrealm, Vomitor and Teitanblood."

It should be no surprise then that 'Circle the Wagons' is a continuation of the low-fi crust-inspired sounds of 2008's 'Dark Thrones & Black Flags,' and at times it's even more hardcore-based.

"I'm very inspired by [hardcore groups like] Cro-Mags, Judge, No For an Answer, Gorilla Biscuits, Bold, Inhuman, Agnostic Front, Youth of Today, Breakdown and Discipline," Fenriz said. "[In] these bands there is a strong base -- strengthening, redeeming, self esteem -- and a lot of contempt."

Lyrically, Fenriz was inspired less by icy Nordic winters or dense, majestic forests and more by his experiences and emotions. "I wrote about feelings about relations to me and the scene, but also friendship with Ted [Skjellum] (a.k.a. Nocturno Culto). There are introvert lyrics and a lot of outgoing anger."

Fenriz said he was inspired to start working on songs for 'Circle the Wagons' after watching a movie at his local cinema. "It was an old Swedish movie from 1971," he said. "They chanted 'Brann Int Slottet,' [the title of the closing track on the album,'] and so, in my mind I made some heavy metal to this choir."