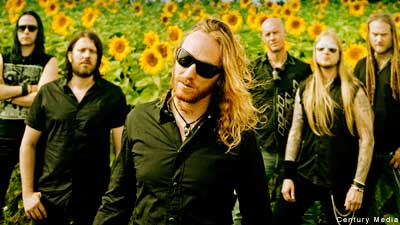 Dark Tranquillity vocalist Michael Stanne, whose band is currently on tour with Killswitch Engage and the Devil Wears Prada, has commented on Killswitch vocalist Howard Jones' departure from the band due to "unforeseen circumstances."

"I honestly didn't understand it at all," Stanne told Noisecreep. "We were in Orlando, [Fla.] I went to bed, and then all of a sudden they canceled and I didn't find out until late afternoon the following day. I know that Howard had some health problems, some back problems. And I think something happened that made it a lot worse, and he just couldn't continue. That's what I heard. I don't know if he's coming back and they don't really know, either."

As shocked as he was by Jones' departure, Stanne was almost as surprised at how well his temporary replacement, All That Remains vocalist Phil Labonte, has performed in Jones' absence. "Phil is amazing," Stanne said. "He does an excellent job every night. I'm so impressed how he could come on in such short notice and do an entire set. We've only done two shows with a non-permanent member in 20 years, and that was weird for us. So I can't imagine. It's gotta be really tough, but they pulled it off great."

Killswitch Engage are no strangers to back aches. Guitarist Adam Dutkiewicz suffered serious back problems in 2007 that required surgery and forced him to step off the No Fear and Warped tours in order to recover. Labonte will likely remain on the road with Killswitch Engage at least through their March 21 date in Wallingford, Ct.