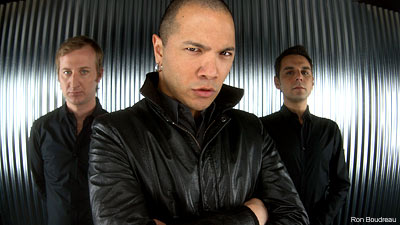 Pushing a year-and-a-half-old album in the United States as if it was new isn't a daunting task for the Canadian rock trio Danko Jones. The band released 'Never Too Loud' March 2008 in its home country, but sent it to stores Sept. 8 in the States.

"We toured all over for it, including Europe, already," said singer Jones, the band's namesake, during an interview with Noisecreep. "The States are a little behind on this record.

"But we've done this before with the States back in 2005. We toured that year in America for 'We Sweat Blood,' which is a record that was released originally in 2003. We've done it before. It's fine. We love the songs. They're our songs. We put them out. We wouldn't have put them out if we didn't like them. We've been playing them for a year and a half now. So what's another year? So it's fine."

"We learned a lot of stuff from [Raskulinecz]," Jones said. "More like recording techniques, how to record and things like that. That's probably one of the things that we picked up from Nick. For me, personally, we spent a lot of time on vocals on that album. I can feel it affecting me, too. I'm infusing more melody when I sing.

"When you're recording with someone of his caliber, you just sit and watch," Jones continued. " He was awesome. He was such a great guy. One thing I learned about Nick -- the reason why he's also a very successful producer is he's a very easy guy to get along with. You need that in the studio. He gets along with everybody. He's a really easy hang."

The name of the album reflects the (tongue in cheek) physical state of the three band members -- which also includes bassist John Calabrese and drummer Dan Cornelius.

Those three men are also almost finished with a new record already. Within a couple weeks, the band is going to head into the studio with knob-turner Matt DeMatteo, who produced Danko Jones' previous efforts, 'Sleep Is the Enemy' and 'We Sweat Blood.'

"Hard rock," Jones said of the direction in which it is going. "Really heavy hard rock -- that's pretty much what we've been doing with all of our records. I think this next record is going to be on the heavier and faster side."