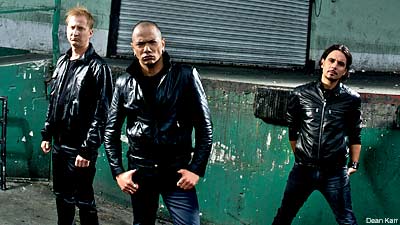 For their forthcoming release 'Below the Belt,' the Canadian rock trio Danko Jones went back to basics, cultivating the sound for which they are known. "I think [2008's] 'Never Too Loud' was kind of our take on classic rock," Jones, the lead singer/guitarist of the eponymous band, told Noisecreep. "We kind of slowed things down a bit. A lot of people didn't like it. They wanted it faster and heavier.

"When we sat down and started writing this album, we realized we wanted that as well. We wanted to get back to the fast, heavy shit. So we did just that. We wrote it and we did it really quickly. We didn't really think about it too much. We didn't hem and haw about parts. We just wrote it. If it sounded good--done. Put it in the bin. Take it to the studio. Put it on tape."

As Jones alluded to, it was a fast process. The Toronto-based band recorded the collection in four weeks. "We pretty much had all those songs we've written before [the studio]," he said. "We didn't have time to sit there and write, whereas with 'Never Too Loud,' we did. We deliberately took a lot of time. We'd never done it that way. We said, 'Hey that might be the best way.' In hindsight, I think we work better under pressure. So we did it. We didn't put too much pressure on ourselves. There wasn't a tour we had to go to in two weeks and we had to write eight songs. There was a deadline hovering over our heads and there was only a certain amount of time we had to write and we did it."

'Below the Belt' will see a May 18 release via Bad Taste Records/Caroline. For the new album, the trio tapped Matt Dematteo to produce, resulting in 11 rock songs that highlight Danko Jones' mix of hard rock and punk with a classic metal twist.

"Matt's done 'We Sweat Blood' and he produced 'Sleep is the Enemy' and he actually engineered 'Born a Lion,'" Jones said about previous releases. "He knows us really well. We're friends. We're buddies. Our working relationship is pretty smooth.

"A good producer will bring his pair of ears to the table that will allow the band to hear their songs from the outside because they can't," Jones added. " They're inside. They've lived with these songs for too long. They've lost a little bit of perspective. The producer brings that perspective back."

Jones said he is proud of the collection of songs found on 'Below the Belt,' but he's most enamored with 'Active Volcanoes,' the second track on the album.

"It's a real ode to Kiss," he said. "It's got an old Kiss vibe to it. I really like that about it. I grew up listening to those albums. To kind of do something they were doing and make it sound like that, very reminiscent of it is cool for me as a fan. I really like [the song] Magic Snake, too. If we can pull one or two of those songs per album, I'm happy. We did it with this album. We did it in the past."