The Fallout, the Rise Records debut from Crown the Empire exploded on the Billboard charts, landing at #1 on the Heatseekers chart and cracking the Top 200. Produced by Joey Sturgis (Of Mice & Men, The Devil Wears Prada, Attack Attack!), the album also came in at #8 on the Indie Albums chart and #20 on the Hard Music Albums chart.

The Dallas-based six-piece outfit started out in 2010, on a mission to separate themselves from other hardcore bands by blending hook-heavy, anthemic choruses with a raw, honest and fresh approach to their songwriting. Crown the Empire also love video, and have created a two-part extended music piece for the song "Oh, Catastrophe," which can be seen below. In just over a week, it racked up over 500,000 views on YouTube.

Crown the Empire is about to kick off the 2013 Take Action Tour along with The Used, We Came As Romans and Mindflow. Just before they hit the road, Noisecreep had a chance to speak with lead singer Andy Leo.

Andy, congratulations on the success of the debut album. It must be very exciting for you guys.

It really is. Mostly because of how the fans are really digging it. We weren't sure how it would be because we kind of strayed away a little from what we did on our first EP [2011's Limitless]. But we knew it was the right thing to do for us, we weren't sure how the fans would take it but they totally got it.

When you say stray away, can you describe that more?

Basically, everyone else was getting real heavy with tons of attitude and we just wanted to get a little simpler and speak to our fans in a way would make a really personal connection. Our producer was totally on board with what we wanted to do and so it worked out well.

The videos you did are playing a big part on helping the record, too.

We've had so much fun making those. Our director, Sam Link, is just amazing. We wanted to incorporate more theatricality into what we do and so that is what we did. We're really big on all that. We want to put on a show so that when you see us you know what we are about.

Did you watch a lot of videos growing up?

I used to watch so many videos! The ones that really stuck with me, I mean understand that we're really young so it doesn't go back too far, but I really remember loving the Green Day video for 'Wake Me Up When September Ends.' There were so many great acting moments in there, it was a huge thing to watch that and it definitely played a part in how we wanted to do things.

What were the first records that really turned you on?

The Used were big for me. Lies for the Liars was awesome. Some heavier stuff too, like Slipknot.

So you must be excited about touring with The Used now.

Beyond excited. It's a total thrill. We're just so fortunate right now. Our goal for this tour and the rest of the year is to just stay true to what we do and dedicate ourselves to the fans. They're the reason all of this is possible. 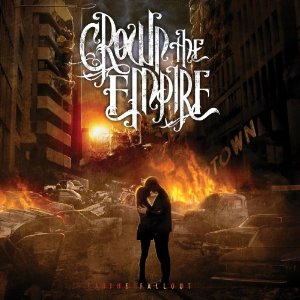 Crown the Empire's debut album, The Fallout, is out now via Rise Records and available on iTunes and Amazon.

Catch the band out on the Take Action Tour 2013 with The Used, We Came As Romans, and Mindflow, on the following dates: