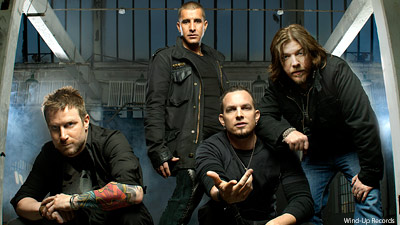 Creed has a week before the final mixes are due for their reunion album, 'Full Circle,' and then it will be mastered and released Oct. 27. "We've completed about five songs that are mixed and mastered," says frontman Scott Stapp. "The other nine are in the process of being mixed and sent back and forth for us to make notes and our thoughts. That's how the process is going right now, but it's all tracked and all done, except for mixing."

Chris Lord-Alge (Green Day, Rise Against, P.O.D.) is mixing the album. The songs -- including the first single, 'Overcome,' and such titles as 'Good Fight,' 'A Thousand Faces,' 'Suddenly,' 'Fear,' 'Bread of Shame,' 'On My Sleeve,' 'Catch Me,' and 'Glass Houses' -- were produced by Howard Benson (Daughtry, Three Days Grace, Flyleaf, Papa Roach).

"I'm really looking forward to talking about the record and talking about the album in more detail," says Stapp. "I'm just appreciative and thankful that the media is interested in what we're doing, and that people want to talk to me." Four songs have been made available to media: the impassioned rocker, 'Overcome,' currently at radio; the bluesy groove 'Full Circle,' the lighter 'Rain' and lilting ballad 'Away In Silence.'

The Florida rock act -- Stapp, guitarist Mark Tremonti, drummer Scott Phillips and bassist Brian Marshall -- finished tracking the album before it hit the road Aug. 6 for an arena tour that is slated to end mid-October. "I think I sang the last vocal at like midnight, the day before we split for tour," says Stapp, referring to the song 'Suddenly.'

The Creed camp has been like a well-oiled machine since announcing their reunion in April (after a bitter breakup in 2004). As they finished the album, they also decided on the title, the artwork and found time to do the photo shoots. "It's been a whirlwind, but we've got a good team and everyone did their part and got on the phone with the band and we gave all our art direction and input," says Stapp.

Onstage, the other night in Chicago, Stapp says the band wrote a song live "in front of 14,000 people" in the middle of their set. "We just felt inspired and Mark started playing a riff that he had played for me, and we just kind of went for it," he says.

He doesn't think the band will scramble into the studio to record that new song for 'Full Circle,' but says, "We may just write the next album that way."