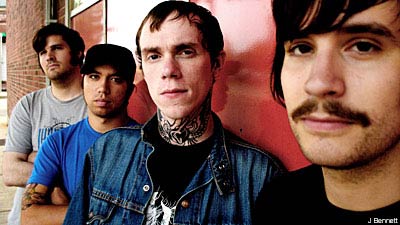 "It's gonna be one of the biggest aggressive music tours of the year, and it will certainly be one of the most credible," Converge guitarist Kurt Ballou tells Noisecreep.

"I heard statistics that Dethklok's album is the biggest death metal album of all time or something," Ballou says, explaining Dethklok's co-headline status. "That cartoon, man, it reaches a whole 'nother audience. I'm expecting there's gonna be a lot of casual listeners at the show who are fans of 'Adult Swim' and aren't really diehard metal fans. But it's good in a way because it drives us to play better because we know we have to win over the audience."

The 36-city trek will mark the fourth time Mastodon and Converge have toured together.

"We've known [Mastodon guitarist] Bill [Kelliher] and [drummer] Brann [Dailor] since they were in Today is the Day, prior to them being in Mastodon," Ballou says. "We've had a friendship with those guys for a long time, and some of their first shows were playing with us. And as they've grown as a band, they haven't forgotten about us."

Ballou, who own Godcity Studio and produces a wide range of metal and hardcore bands when he's not with Converge, says he might bring some recording equipment on the road and try to schedule some sort of collaboration with members of Mastodon.

"I would certainly like to do work with them. They're all people whose musicianship I really respect, and if we have time to get into it when we're on tour, we will," he says. "Surprisingly, with all the free time there is on tour, you still end up not being able to do that stuff. It's not usually an environment that's conducive to playing because there are so many distractions and there's never a quiet place to go to work on music. Maybe I'll bring my mobile recording rig with me on this tour and try to record them live a bunch or something?"

If Ballou actually ends up writing with anyone in Mastodon, it wouldn't be the first time. Several years ago, Mastodon guitarist and vocalist Brent Hinds excitedly approached Ballou with a riff he'd written for Converge. "He went, 'You gotta use this in a song!,'" recalls Ballou. "And I went, 'Alright, I'm gonna write you a riff,' too!' We made videos of ourselves playing the riffs for each other and we showed each other how to play them."

Converge incorporated Hinds' riff in the song 'Reap What You Sow,' and was all set to include it on the band's new album, 'Axe to Fall,' which comes out October 20. But then one of Ballou's friends played him 'Crack the Skye' shortly after it came out, and Ballou heard something he wasn't expecting.

"I was like, 'Oh, that riff sounds familiar,'" Ballou says. "It turns out Brent had just forgotten that he gave me that riff and decided to use it in a Mastodon song, so we had to completely change our song. I'm sure he was just wasted and forgot he gave it to me."

In the end, Hinds' mistake was a blessing in disguise for Ballou. "I kinda felt like the song was suffering from too many ideas anyway, but I was having a hard time convincing the other guys to cut something out of the song," he says. "So having this same riff appear on a Mastodon record was a guarantee that we had to simplify the song. And I think it made the whole thing stronger."

On the drive from Massachusetts to the west coast, Converge plan to play some of their own shows. And since the tour wraps up in Los Angeles, they'll probably schedule some more gigs on the way back home. Also, Ballou says they'll play their own shows on off-dates from the Deathklok/Mastodon tour.

"It will be fun to do our own shows," he says. "I'm really looking forward to playing a lot of the new songs. I'd love to play the whole album live, but I'm sure that's not gonna happen. But we'll definitely try to mix up the sets and not do the same show every night. We've been a band for almost 20 years now, so we've got a lot of material to draw from."