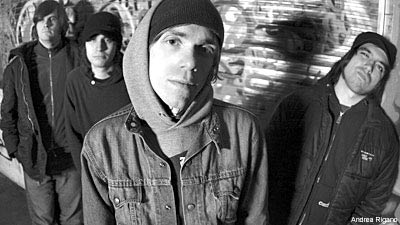 "It's a collaborative record," Converge frontman Jake Bannon told Noisecreep about his band's forthcoming effort, 'Axe to Fall.' "There were a lot of people involved, and it's not just a four-piece band record. We have a diverse group of friends who worked with us on the record."

For 'Axe to Fall,' the band recruited all the members of Genghis Tron, who played and wrote; members of Cave In played on and wrote on the record; Brad Fickeisen from the Red Chord and Steve von Till of Neurosis also performed on the record; George from Blacklisted also contributed.

"It is an interesting mix of people, all coming together," Bannon conceded. "Sean Martin, who was in Hatebreed, is an old friend of the band and one of my closest friends, and he played on the album. It was an idea we had years ago, to do a collaboration record with a wide variety of people. But we let it slide, since the idea was grandiose and we were busy. We had recorded songs with Cave In, as a 'supergroup,' for lack of a better word. But it ended up being people coming together creatively in the studio, and those songs ended up on the record in a different way."

Technology certainly aided the process, according to Bannon, "This record couldn't happen without email and technology. That's how people were getting their tracking done. Sean played at the studio, and since Neurosis was heading out on tour, Steve did his at his home studio." All these creative musical minds have pretty much made metal history, as Bannon said, "This has not [been] done in abrasive, aggressive music -- not at this level of collaboration."

To support 'Axe to Fall,' which is out Oct. 20, Converge will be touring again with Mastodon, which marks their fourth go-round supporting the band. "We have been friends a long time and their tour was coming together and we were having a difficult time landing bands we wanted to tour with," Bannon said.

"Then they extended an invite and the timing made sense," Bannon added. "So of course we wanted to do it. It's a challenging tour for us. It's more of a concert than a show, for the audience that will be at those things. We'll play as hard as we can for 40 minutes, and that'll be that. People there will be introduced to aggressive music in a different way; and hopefully, they will hear us and take something away from it."