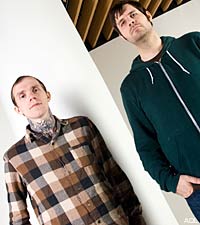 Over the past decade, as internet technology got more advanced and album leaks more common, music journalists typically shook their heads in dismay at the wave of records hitting the Web weeks -- even months -- before their release date. Conventional wisdom in the writing community held that it was radio station personnel, studio interns and CD pressing plants that were responsible for all the unlawful activity, and that journalists were bearing the brunt of the misdeeds of others. Not so, Converge frontman Jake Bannon tells Noisecreep.

"Most leaks are journalists, and that's one thing that labels don't like to talk about, and the people who leak records don't really want to talk about," he insists. "I'm not really sure why. Maybe they're fearful that they're gonna lose some sort of press through a publication, if you allow that information to get out that a writer leaked a record."


Bannon speaks from experience. On Oct. 5, Converge's new album, 'Axe to Fall,' was leaked by a journalist at MetalSucks. And while the Web site posted that "the album was absolutely not leaked intentionally," it was the second time Converge have been burned by a member of the music press.

"In 2004, it was a writer in a large publication that leaked our 'You Fail Me' record, and leaked it three months before the release date, doing a huge amount of damage to the record label, and to the title itself," says Bannon.

While he understands why fans would download a leaked album, Bannon can't fathom how a member of the media would allow an unreleased album to leak, intentionally or by accident. "I think people download records out of sheer love for music or curiosity, And that's not necessarily a bad thing," Bannon says. "But when you have people that are involved in the press, such as people who are running publications or reviewers, writers, whatever, just abusing their power, you have to look at their reasoning behind that, and why they're doing that."

Bannon doesn't necessarily advocate blacklisting or taking legal action against writers who have leaked records. And he doesn't condone abolishing album advances to the press. The best way to combat the situation, he says, is for the media to police itself and exhibit responsibility.

"If they're doing it for the love of music, they're damaging the labels and the artists that are simply paying their bills," he says. "I don't understand how that works, and I don't understand who wins in that situation. We want to get our music heard by as many people as possible, so again, if people are interested and they download a record, that's not a negative to me, but I always feel that there's something inherently wrong with a person that's leaking a record, regardless of whether it's leaked intentionally or not. If you're entrusted with something, then you are responsible for it."

Nile frontman Karl Sanders exhibited similar dismay in mid-October when the band's new record, 'Those Whom the Gods Detest,' was allegedly leaked by the same writer who leaked Hypocrisy's new one, 'A Taste of Extreme Divinity.' He told Noisecreep that the label is planning to take legal action.