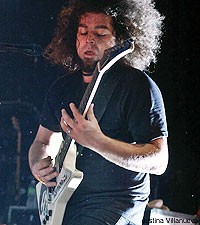 If you've ever loved Rush, Queensrÿche, Iron Maiden, Led Zepplin and Pink Floyd, then you can understand the extreme admiration people have for Coheed and Cambria. For me the band -- with their hearty, retro guitar solos and progressive song structure -- has always been a tribute to the great bands who kicked off heavy music in the first place.

When Coheed and Cambria played in New York City at the Music Hall of Williamsburg on March 31, their set really took me back to my teens. Older songs like 'A Favor House Atlantic' and 'In Keeping Secrets of Silent Earth: 3' were the songs I listened to a lot in high school. And like many Coheed songs, they are the anthems for young people with old souls.

"Everybody cool down there?" bassist Michael Todd asked the crowd. We were not, but the crowd's cheers suggested yes. He then thanked us for the fourth time of the night. It was not the last time, either. That's never a bad thing. It just means that the band is actually having fun instead of feeling like they are doing a job.

A chant of "play 'The Trooper'" went strong until they played the Iron Maiden cover in their encore. Coheed sealed the night with the secret track off of 'The Second Stage Turbine Blade' called 'I Robot.'

The band will be back in New York City on May 26, when they play with Circa Survive and Torche. This summer they will also play Download Festival, Sonisphere and Japan's Summer Sonic Festival.