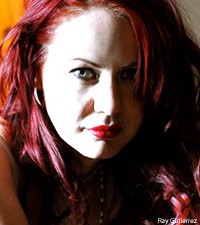 The most recent rhythm section of the now-defunct Coal Chamber -- bassist Nadja Peulen and drummer Mike Cox -- have found their way back to one another. But relax. It's not a Coal Chamber reunion, which fans shouldn't expect any time soon. Peulen filled Noisecreep in on her recent musical activities, saying, "I've been itching to get back out on the road, keeping my ears open to what bands may be looking for a bassist.

"I recently reconnected with my drummer from Coal Chamber, Mikal Cox. We had both written a bunch of new songs already and realized that we are heading in the same musical direction, which is more alternative rock and new wave with a heavy groove. Since we already played together as the rhythm section in Coal Chamber, we figured why not join forces again?"

The flame-haired Peulen and Cox have been working on their new project recently and have some folks in mind to fill the vocal and guitar slots. But aspiring singers and slingers with similar visions, don't count yourself out! "We are still curious to see who else might be out there, so any referrals or inquiries are welcome." If you think you're up to snuff, contact Peulen at www.myspace.com/nadjaonline or nadjaonline@gmail.com.

Beyond her bass-playing activities, Peulen is also reorganizing her T-shirt company, CruelTees, which she hopes to relaunch later this year. "This time around, I want to expand from Hot Topic and my online store to a variety of retail stores and multiple online markets."

The bassist/designer is also looking to assemble a new team to handle the back end of the line. She said, "Up until now, it's been a one-woman operation, which proved too much too handle between my music and designing. This time around, I want to design more apparel than just T-shirts, and the new designs and website should be up and going just before the end of the year."

We predict we're going to be hearing a lot more from Miss Peulen in 2010!