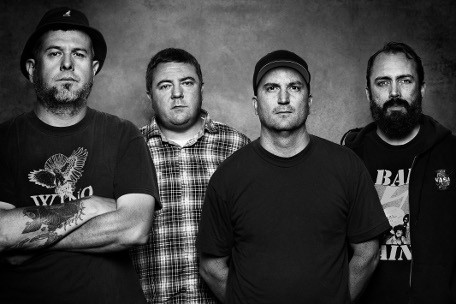 Clutch, in fact, may be America's greatest (and heaviest) jam band. Call 'em the Grateful Dead for Black Sabbath freaks or simply the sound of heaviness sans boundaries. Does it really matter? They rock like nobody's business and prove it on their upcoming long-player, Earth Rocker.

It's hard to believe that it's been over two decades and ten albums for the Maryland-bred foursome. Still, they only get wiser and heavier as time goes on. As frontman Neil Fallon himself proselytizes on Earth Rocker's title track: If you're gonna do it, you better take it to the stage or don't do it at all!" when Clutch does hit stage, they do it for real. Guitarist Tim Sult's Orange Amp is nothing short of a riff factory. Drummer Jean-Paul Gaster and bassist Dan Maines aren't merely "in the pocket – they dig trenches. And of course, Fallon's Frank Zappa-by-ways-of a-frontier-preacher warble still grabs listener by the shoulders and tosses him into the baptismal broth like nobody's business.

Noisecreep caught up with Dan Maines to talk a bit of Clutch philosophy as well as their band-run, Weathermaker label and putting the power of the jam back in their very own hands.

Clutch is a band that has never been afraid to experiment. Is there a Clutch mindset when it comes to making music?

Anything goes! That's the Clutch mantra as far as writing a song. Whether it's a slow tempo song or a blues song or a straight-up rock song, we always try to make it as heavy as possible. It's a common thread with anything we write. We want it to be heavy but sometimes that doesn't mean layers of heavy distortion. It can be the nature of the drumbeat. It's something that we're learning continually – how to adapt different styles of music into what we do and still maintain a level of intensity and heaviness. At the end of the day, that's what we are. We're a hard rock band.

Speaking of which, you made a very straightforward rock record with Earth Rocker. Clutch is usually known for being a lot jammier. Was there a conscious reason for that?

The nature of the songs really dictated that. When we started writing, what sort of songs we wanted to write wasn't something we necessarily talked about a lot. As we were getting more involved in the writing process, we realized that the more concise, straight ahead rock songs were the ones that really appealed to us the most at the time. Once we saw that, we made an effort to make that the theme of the record. We ended up with ten very, hard-hitting rock songs and one mellow tune in the middle of the record. It's called 'Gone Cold.' It's very much in the vein of some older songs we redid for the Blast Tyrant reissue. That was something completely new for us. Writing a song at such a low volume.

The first couple records, Transnational Speedway... (1993) and Clutch (1995) are very heavy and you can basically hear what the influences are. Helmet, Corrosion of Conformity. At what point, early on in Clutch's career, did a feeling of creative freedom creep into the music and why?

For me, it was about reaching a point in my own skills and musicianship to be able to do it. The first record I was on, I was on, I was literally playing catch-up to Jean Paul and Tim. They'd been playing their instruments years ahead of me.

We've always considered bands like Black Sabbath and Cream, Led Zeppelin as being inspirational bands. Those guys jammed all the time. For us, it's a great way to make a live performance entertaining for the band as well as the audience. It honestly just stemmed from boredom playing the handful of songs we had at the time the same way over and over again.

From day one, we always enjoyed doing things outside just playing a song from beginning to end. I was just watching a video of ourselves from '92 at the old 9:30 Club in DC. We started the set with some kind of instrumental thing. I don't even recall ever playing it. It's something that we wrote that never really turned into a song. We played that as an intro and went straight from that straight into 'Piledriver.' That's something that we've been doing from the beginning – you can call that jamming. The idea of taking a song and instead of ending it where it's supposed to, just improvising on the spot and taking it someplace else was something we started when we were touring on the self-titled record. That had to do with the style of riffs we were writing at the time lent themselves to that sort of improvisation. It's a great way to learn: when you're onstage and you try something new. You may not be able to pull it off but at least you'll learn from it.

Do you think Clutch fans are so diehard? Why do you think they are so into it?

I think that the average Clutch fan is a true music fan and I think they recognize that we're not trying to just play one style of music. They see that Jean-Paul can play go-go or Neil wants to play blues and we're not afraid of going outside what somebody might think is strictly metal. I think people who listen to our music appreciate that. Plus, we don't want to repeat ourselves album after album. We are trying to do something different for each record. If you ask the average Clutch fan what attracted them to our music, I think that variety and musicality might be a big reason.

Clutch now releases its records through its own label: Weathermaker. What created the necessity for it? Are you guys enjoying releasing your music that way?

We just got tired of dealing with labels. We had the misfortune of releasing each of our albums on different labels – except for our experience with DRT who released three of our records but even that also ended on a sour note. We just didn't want to go through that again. The timing couldn't have been better right now to take a DIY route in releasing your music. We're in a really good space right now. We have good management. We have a couple people are helping us manage the label and we are taking it slow with Weathermaker. Initially, with the label, the goal was Clutch. What was the best possible way of releasing a Clutch record? We didn't try to bite off more than we could chew by saying: 'Let's start a label and we can sign all these bands that we love but no one wants to put out their records.' That's not what's in our heads as far as Weathermaker but there's nothing saying that that couldn't happen five or ten years down the road.

With Earth Rocker, there are quite a few references to classic rock, lyrically and musically. For example in the song 'Crucial Velocity,' the lyrics refer to the Jackie Brentson song, 'Rocket 88' which is considered the very first rock song – or at least the first one to use distorted guitars.

Some of these you have to ask Neil about. He holds the key to his lyrical whimsy. I couldn't tell you half the stuff he's talking about. There are a lot of references like 'Rocket 88' that hearken back to the foundations of rock 'n' roll music. I think a lot of that might just stem from the kinds of songs we were writing on this record. Musically, a lot of the songs on this record have the fundamentals of core rock n roll songs. Jean Paul is playing a lot of shuffle drumbeats and I'm playing a lot steady 16th note bass lines. It's not anything new to rock n roll but it's relatively new to us as far as putting it into a Clutch song. I think that was something Neil was picking up on too and it carried over into his lyrics.

Are there any obscure or classic rock records do you guys get excited about?

I know Neil especially was starting to dig up a lot of older rock records from the Chuck Berry era. I think that was inspired by touring with Motorhead and reading what Lemmy had to say in interviews about what inspired Motorhead when they write songs. Lemmy always goes back to early rock records from the 50s and 60s. It makes you listen to Motorhead in a slightly different light. That is what Motorhead is doing – just carrying on that tradition with a little more distortion and growl.

Can you think of five classic rock records that are key to what you do?

Overall, I would say the Band of Gypsies record would be one. Sabbath Bloody Sabbath, Live Cream, maybe Slayer's Reign In Blood and I should probably throw a James Brown record for fun - Live at The Apollo perhaps. Funkadelic. The first three Bad Brains records. The Bad Brains have always been a big influence on us. They've been one of my favorite bands since I started listening to music and it amazes me how I never get tired of listening to any of their records – even the newest one.

Speaking about classic rock when were making your third album in 1998, Elephant Riders, you recorded a bunch of material with legendary producer, Jack Douglas (Aerosmith). What happened to those sessions?

Basically, at the time, we didn't like other people telling what to do. It was a little bit of a shock to us in that time in our careers to work with someone who had so many ideas about our music. Being young at the time, we may have taken a wrong attitude about some of his suggestions. Overall, he actually was pretty easy to work with. But, of course, there were a few things he brought up where we were like, 'C'mon dude.' But, we did end up keeping a number of those tracks – mostly as B-sides.

Clutch is a band that defies categorization. You must hate every tag that gets slapped in you – especially stoner rock.

It's difficult because people have to put a label on things somehow; especially if you're writing or reading about music. You have to have some kind of label to quickly reference where it is this music is coming from.

The one mistake a band can make is trying to write songs that they think will lump them into a particular genre. At that point it becomes this circle of commonality and the music loses its original spark. Thinking of a genre like stoner rock, it seems like the original bands that inspired the term 'stoner rock' became the bands that every other stoner rock bands were trying to emulate rather than simply learn from as an influence. This cycle of bands re-emulating themselves just cancels out the music for me. We're definitely not a part of that. 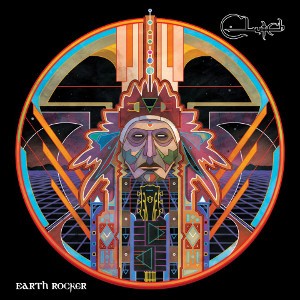 Earth Rocker will hit stores on March 19 and can be pre-ordered directly from Clutch at this link.