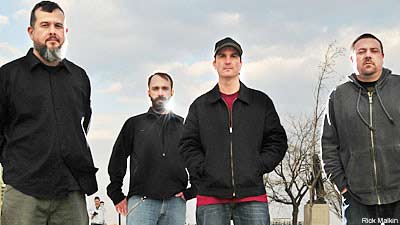 Clutch are just like whisky. They get better with age and they both have their roots firm in blues, rock, funk and metal. Today sees the release of 'Strange Cousins From the West', the bands ninth studio release, and as is expected Clutch brings their big, riffy slap and this time they left the keyboards from 'From Beale Street to Oblivion' behind so the sound is open for the guitars to scream and the groove to dominate.

One item of note, 'Strange Cousins From the West' is the first Clutch studio album to be released on the band's own label Weathermaker Music. The band started the label after years of bad relationships with major and indie labels. Drummer Jean-Paul "JP" Gaster filled us in on how paying for the album themselves effected the recording and the long birthing process of their label, which when JP looks back on the nineteen years of the band so far he calls Weathermaker, "the most gratifying thing."

Was there a reason you guys you recorded with J. Robbins for 'Strange Cousins From the West' rather than returning to Joe Barresi?

The most obvious thing was a financial one. Weathermaker is a label that we just started and quite honestly we just didn't have the funds to get out to California to record a record, much as I love Joe Barresi and the very nice studio that he works in, and all the delicious tacos in California. It just didn't make sense for us to do it. We're just now starting up this thing and are very careful to make the right decisions. I think we always error on the side of being conservative rather than spending too much money.

On the flipside too J is a great ally, we've known him for many many years. I have tons of respect for him and the utmost confidence in his abilities. I don't view one guy as better than the other; each one has their own strength. It's a pleasure working with J He's really in-depth in how he works in his studio; he's got great sounds and it's really easy to track drums with him.

Now this is actually the second label you guys have started. How is Weathermaker different from River Road Records?

River Road Records was something that we began experimenting with back in the '90s with records we would record and produce ourselves; and we would sell them at shows and on the internet only. It was kind of interesting when we were signed to Columbia we had released 'Elephant Riders' and toured very heavily on that record, and when we were finished we were very ready to make another record. In true major label fashion those people began to drag their feet; they wanted demos and they wanted us to record and write the right songs, and we sort of jumped through some of the hoops but they were not anxious to put us in the studio. So we said you have to shit or get off the pot. We're gonna make another record and release it on our own.

And that's essentially what we did. We recorded 'Jam Room' and released it on our own, sold it on the internet. Everyone at the label was well aware what was going on. It wasn't until a couple of months after that that we negotiated our way off the label and out of our contract and ended up back on Atlantic again.

But the idea was that was the one thing that we could control. As a band you can control your touring and your song writing. You can write as many songs as you want. Whether the label wants to put them out if up to them.
So that was a little experiment for us but I think we learned early on that the fans apprentice those types of things as well. Now Weathermaker is different than River Roads in that we have a real distribution system this time. That was something we didn't have before.

Was it hard to get distribution set up?

We finished our contract with Atlantic in 2001 and by that time we had had it labels be they indie or major and we decided let's look into making our own label. Of course the first thing you have to have is real distribution. So we went to distributors at that time, and in those days they were not very receptive to dealing with the idea of dealing with a band. They really wanted to stick to the status quo of signing the label that way they can get fifteen or twenty albums out of the deal a year rather than dealing with one band. So as much as we hated it we ended up signing with DRT with the idea that it would be a different kind of relationship. It wasn't supposed to be the traditional band/label kind of relationship; it was a kind of 50/50 kind of deal, which was kind of a puzzler, it was the kind of deal that was going on back then.

So we went with it and fulfilled our contract and, ya know, a few years later we went back to the distributors and all of a sudden these people were willing to play ball and I think it has a lot with how the industry has changed. The distributors realized that we, as a band, can sell a lot more than an independent record label with all of their releases combined. So that made them anxious to do business with Clutch.

So we started Weathermaker and so far so good. We've got a couple of releases under our belt now. We are really excited to be in this position. It's really empowering.

Were you guys afraid to take this step with no backing of a corporate net in case it didn't work out?

Absolutely not, that was the least of our concerns to be honest with you. Since the inception of the band we have had a tough relationship with labels. We knew going into this thing that even if we were terrible label managers at the end of the day we were going to be able to do a better job than any major label out there.

The proof is in the pudding. You look at the sales of our The Bakerton Group release 'El Rojo', and that's just a side project-a jam band we do, and that was a great success. We know we have a strong fan base and it really boils down to the band wanting to get out there and work. Touring is just what we do. We were never afraid of that aspect at all.

Filed Under: clutch
Categories: Interviews
Comments
Leave A Comment
Back To Top