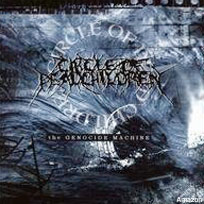 Labels fail. They go bankrupt, and albums that should have conquered their respective musical landscapes go out of print and never get the push they should have. 'The Genocide Machine' by Circle of Dead Children is a record that never got the push it needed in the wake of a label nearing an end. But despite that, 'The Genocide Machine' stands high above a packed collection of grindcore and death metal albums that inadvertently today mimic a record they probably never got the chance to hear.

Circle of Dead Children come from Pittsburgh, a place that has always seemed to spit out metal bands that create new paths for the music to travel and transform using steps of high technicality.

Circle of Dead Children created a mixture of death metal and grindcore that is all of their own; it's calculated and relentless with not an inch of forgiveness hidden in it. Walls of noise are built fast and change before you can get comfortable with their tone and attitude. The lineup of Circle of Dead Children has always been an ever-changing one except for founding members Joe Horvath on vocals and Jason Andrews on guitar. 'The Genocide Machine' was a theme record but there are two hands of doom extending from it.

The first hand of doom: The end of the word is coming by the death of our environment. This idea was not touched on in metal in 2001 aside from a few hardcore bands that screamed about trees.

The second hand of doom: The nature of humanity is the created beast that will not only kill the world, but will cheer itself on in the process. Humans are their own super villains.

The philosophical idea presented from that second hand put 'The Genocide Machine' in its own class. Sure bands talk about the end of all things, but most of them write about it in a jerk reaction to create masturbatory like lines about blood and carcasses. To tackle this from an idea that it's the destiny of humanity itself to do so, that was new.

Musically 'The Genocide Machine' is an unsettling churn of precession marking the end of life. Joe Horvath's grim reaper bear growl and hiss spit cheer on the darkness played behind him to the tune of blast beats. Some songs are split up with digital bubbling that break from the metal onslaught. These intermissions bring a level of discomfort, a moment not healthy to reflect on -- with this the re-entry of grind speed guitars are welcomed. The album comes to an end with a slow riff playing to a spoken word piece by Horvath called 'CTrl* Alt* Delete'. In the track Horvath sums up the entire record for those that had not been paying attention.

He sees the machine of human nature as one that cannot be stopped. Unlike the hardcore counterparts of the time that spoke the world brought to its knees, Horvath saw no hope of change. With a riff settling in to the standings of doom the entire album rest on the crisply delivered message. "Instead of becoming more aware and conscious we have ignored and justified choosing to leave the aftermath to what we hope will be the next generation of a more conscious and caring society, but in reality it will be more of the same predictable scum."

In an interview from 2001 Horvath explained the importance he saw in lyrics, and how the lyrics on a record like 'The Genocide Machine' was being grasped in other scenes beyond just the dark metal ones. "A lot of people into this type of music don't really put a lot of focus on the lyrics. They are just there. I figure, why write the same type of gore or death lyrics over and over again? It just gets boring. If you are focusing on the music not being stereotypical, then why are the lyrics stereotypical? The thing that we have been fortunate with our music is that it has been able to cross over many different genres, into the death and grind as well as the crust punk stuff and hardcore scene. I think those scenes have picked up on the lyrics, while the death and grind scene has picked up on the brutality of what we do. I think it all works out so well."

Later he lets a pride display itself over the support he sees for his unique lyrics saying, "The feedback about the lyrics has been non-stop. I get kids e-mailing me and telling me how deep the lyrics are or how good they are and that makes me feel good. To be honest, I'd rather get complimented on the lyrics I write than the vocals. The lyrics mean a lot to me."

Put out by an imprint of Necropolis Records 'The Genocide Machine' fell out of print very fast. Despite having great sales the label was barely standing by the time the album came out. To pick up the demand for the album Willowtip Records, which had released the previous Circle of Dead Children albums, produced 200 hand numbered LPs packaged in a silver static bag. Those were gone before most even knew they had been made. Many have thought Circle of Dead Children are no more, but the band becomes silent from time to time focusing on real jobs while members solidify over time. Early next year a new album entitled 'Psalms of the Grand Destroyer' is due to hit in all forms courtesy of Willowtip. It has been fully recorded and is being mix and mastered by Scott Hull of Pig Destroyer.