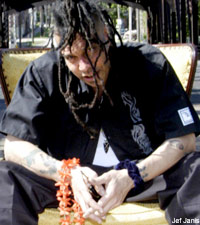 Chuck Mosley, who fronted Faith No More for their first two albums, Bad Brains for two years and Cement for two albums, has another talent beyond singing and writing songs -- cooking. To make money between music stints, he became a chef.

"Right now, I haven't been doing it because we wanted to get this record done," says Mosley, who has just released the album 'Will Rap Over Hard Rock for Food.' "Actually, four years ago I got a double hernia and I did that carrying a big pot of soup so I stopped working. My girlfriend started working full-time, and we started working on this record."

While he can't get a hernia from being a pastry chef ("Yeah, it's all light and flaky," he agrees), he admits, "Unfortunately, I'm not as good a baker as I am a cook."

So when Mosley hits the road behind the new album, he's not concerned that there may only be McDonald's and KFC for miles between cities. His interest in gastronomy doesn't make him a food snob. "Not at all, I've always loved junk food," he admits. "I can be in the middle of preparing a $40 plate and then send out for pizza."

But his culinary skills won't go rusty while he's touring. "When we hook up with friends that are responsible enough to have a house and a kitchen and utensils, we pool our money, go shopping and then I cook for everybody in return for them letting us stay at their house. So I like to cook on the road. I choose the region and the style and then I go to work."