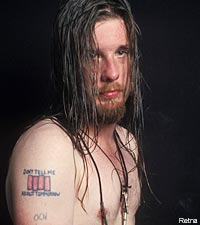 Chuck Biscuits, best known as the drummer on the first four Danzig albums, succumbed to throat cancer on Oct. 24 at the age of 44. "In response to the inquiries, thank you for all the support," an anonymous family member wrote in an e-mail sent to fans early Oct. 28. "Chuck did not survive his battle with throat cancer. He passed surrounded by his family."

Born Charles Montgomery on April 17, 1965, Biscuits' first band was the legendary '80s punk act D.O.A. Upon moving to California at the age of 17, Biscuits joined Black Flag, then played in a variety of influential punk bands including the Circle Jerks, Fear and the Weirdos. In 1987, he joined Danzig, playing on the former Misfits singer's first four albums, as well as 1993's 'Thrall: Demonsweatlive.' The video of 'Mother'' from that album became a hit on MTV. In addition to the his work with Danzig, Biscuits also played drums on some tracks on Run DMC's 1988 album 'Tougher Than Leather,' and after leaving Danzig, played some shows with Social Distortion.