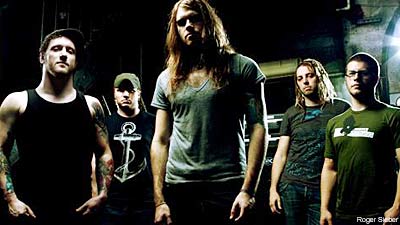 Oh, Sleeper vocalist Micah Kinard recently spoke with Lambgoat to discuss the near future of the Forth Worth, Ind. band. Having just released their sophomore LP, 'Son of the Morning,' Kinard discussed how the album is a conceptual piece of work, as well as the nerves that come with the expectations of a band releasing a second album. Trying to go above and beyond the bar that their 2007 debut, 'When I Am God,' set up for them, the new album works as one long piece -- the kind of record with a track list that's best experienced from start to finish.

With one song written, Kinard wanted to aim high for a theme that was controversial and blatant. "I wanted to write a song that was voiced completely by Satan," he said. "It's kind of iffy doing that when you're releasing an album on a Christian label [Solid State] ... I really wanted to put a face with that instead of always beating around the bush or just saying 'temptation' or just saying 'stumbling' or whatever."

He turned his attention to God's perspective, and the concept eventually layered the complex viewpoints between God and "different people in different parts of their lives." In addition to having a new drummer, Kinard feels the album was approached in a completely different way than 'When I Am God.' Christian bands are commonly having to stand their ground, often criticized by the more secular metal world for being too preachy or insular.

For this, Oh, Sleeper had their initial hesitations with signing to Solid State, not wanting to be pigeonholed as a Christian band. And Kinard reflects on his attempts to keep the band away from that corner and constantly mingling with a variety of bands and fans.

Their tour with Every Time I Die and Bring Me the Horizon will begin Sept. 18 in San Diego. And in mid-October their run with the Chariot and We Came as Romans takes off until early November.

Filed Under: Bring Me the Horizon, BringMeTheHorizon, chariot, Every Time I Die, EveryTimeIDie, Oh Sleeper, OhSleeper, we came as romans, WeCameAsRomans
Categories: News, Tours
Comments
Leave A Comment
Back To Top