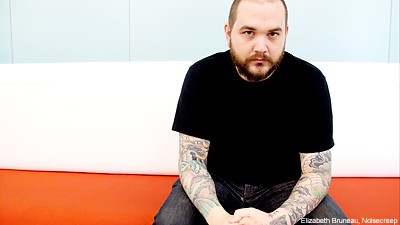 "A band, who will not be named, they just show up and don't know anything about their gear or about music," McCaddon told Noisecreep in our New York office. "Calling themselves a metal band and all it is is breakdowns and they can't reference anything. I might be old school, I am in my 30s you know, whatever. I might not be hip to all the stuff. Especially the fact that a lot of these "death metal bands" are nothing but hardcore bands with death metal logos with just break downs and stuff."

What Chris is Listening to:

Tombs. Amazing. Torche, Trap Them. A lot more of the punk/ grind stuff I've been listening to.

On The Famine Recording Plans:

We're writing for our next album, and just trying to think of when we're going to go into the studio. And all of that nonsense of like, "who's going to mix it?" "Do we want someone to produce it?"

On The Famine Touring:

Us being new, and to not have sold tons of albums, it's real difficult for us to get on these bigger tours. Not even main support, but support for these bigger metal acts. Because, for instance, Lamb of God is touring with As I Lay Dying, Children of Bodom, Cannibal Corpse. All those bands could be headlining their own tours. So, it's really hard for us to fight in that. There's just tons of competition out there. And it's difficult for us to do anything other than something like that because there's just no money in it anymore.

(Battlestar Galactica) and Lost. Battlestar Galactica was one of the things I kept - not a secret - but I was just like, "No one is going to understand." They're going to call me a dork or whatever. Then the more and more people I knew who were watching, I'm like "Hey this person is not a complete geek. He gets it. He understands it."