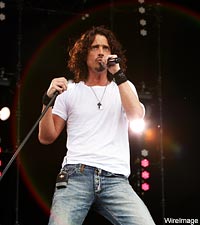 After eight months of harsh criticism from journalists and fellow musicians, Chris Cornell has decided to re-record his third solo album, 'Scream,' with a more rock-driven sound. Ultimate-Guitar reported on the story, saying that since he stood behind his production pairing with Timbaland for the record, the news comes as a shock. The site has also posted the album and recently released rock mix of 'Never Far Away' for comparison.

Returning to his rock roots in more than one way, Cornell took the stage at a Pearl Jam concert in Los Angeles late last week and reunited, briefly, as Temple of the Dog for a performance of 'Hunger Strike.' Revolver magazine also noted that Soundgarden guitarist Kim Thayil and bassist Ben Shepherd were in attendance, which "makes this the first time in 13 years that all four members have appeared together publicly."

Before the March release of 'Scream' and the sudden yet quiet "reunion" of Soundgarden happened, The Onion had run a story on Soundgarden coming together at a Cinnabon in Seattle. The tongue-in-cheek news source reported that Cornell had serenaded Thayil "with a version of the group's hit song 'Black Hole Sun' in which he replaced the titular phrase with the word 'Cinnabon.'"