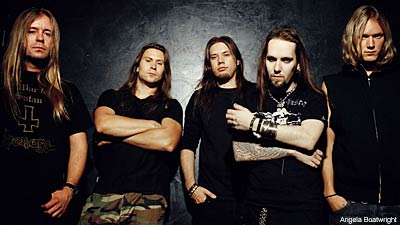 Fun-loving Finnish metal band Children of Bodom have posted a new music video for their take on Creedence Clearwater Revival's classic 'Lookin' Out My Back Door.'

The CCR remake, as well as 16 other covers (including both previously-released and newly-recorded, wild versions of original hits by Pat Benatar, Billy Idol, Poison, Britney Spears and more) appears on COB's 'Skeletons in the Closet' record, which came out this week through Spinefarm.

Children of Bodom are currently on a 20-city North American headlining tour with the Black Dahlia Murder and Skeletonwitch now.